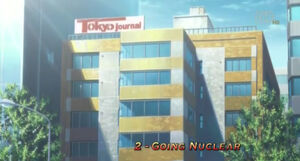 A shipment of plutonium is stolen by mysterious people. The next day, Nanami is writing the article when she hears about Tony being subpoenaed to the Diet of Japan. The stolen plutonium leads Tony to be accused of smuggling nuclear materials into Japan with the ship being associated with Stark Industries and having to give a statement before the Diet of Japan claiming that the claims of him smuggling plutonium is a lie. In order to get away from the press, Tony hitches a ride with Nanami Ōta and Ichiru Masuda. Nanami states that Tony still owes her an interview and wants to help improve Tony's image. While investigating the ship where the plutonium was being transported, Iron Man encounters a Zodiac robot called Cancer. Tony contacts Kuroda stating that Zodiac is behind the plutonium theft yet Kuroda doesn't want Tony to continue his investigation. Hacking into a surveillance camera, Iron Man discovers who the culprits are and loads their coordinates into the Iron Man armor. Tony Stark drives past Nanami who ends up pursuing Tony in order to get an interview and borrowing Ichiru's camera while borrowing a man's scooter. Tony has Kuroda tell the Mayor of Kyoto apologize for the traffic jam he's about to cause and catches up to the culprits. Nanami crashes into the culprit's car causing a mix-up. Tony drives them towards a security checkpoint, but he is blocked off by a JSDF operative named Captain Nagato Sakurai. Nanami mixes her camera with the plutonium the culprits were carrying to the rendezvous point and is chased by an armored tank equipped with stealth camouflage that is being piloted by the culprits. Tony Stark becomes Iron Man and goes after the tank as Nagato Sakurai sends a transmission to have the roads cleared. After Sakurai helps Iron Man deal with the tank, Iron Man faces off against Cancer again who targets Nanami for the plutonium and breaks off his claws. Iron Man then throws Cancer into the air and destroys him with his laser beams. Tony Stark is cleared of all charges and Nanami was able to write a good article. Nanami hopes that the Japanese public will learn something about this. Ichiru gives Nanami some flowers which were shipped to him by Tony Stark. Kuroda asks Nagato Sakurai about what he thinks about Tony Stark. Nagato arrives where a new armor is being built.

Like this? Let us know!
Retrieved from "https://marvel.fandom.com/wiki/Marvel_Anime_Season_1_2?oldid=6497598"
Community content is available under CC-BY-SA unless otherwise noted.