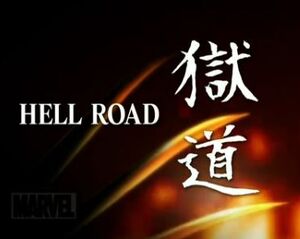 Wolverine and Yukio drive their motorcycle over Hell Road towards the Dragon Palace, dodging the numerous lethal boobytraps along the way, as well as the various gangs that attack them. When they lose the motorcycle to such a trap, they continue on foot. Yukio is surprised to hear Logan made a deal with her grandfather, and that Koh’s gang supposedly has a secret tunnel to the Dragon Palace.

Yukio’s suspicions are correct, since there is no secret tunnel; Koh and his gang want to use Hell Road to get to the palace, and rather than just being a distraction, Logan is actually clearing a path for them.  In the Dragon Palace, Hideki inspects the repaired Vadhaka. When he hears that Logan is making his way to the palace through Hell Road, he insists the wedding ceremony must continue as planned.

When Logan and Yukio fight off yet another gang, who deploy a trap involving wet cement and pendulums of death, Koh’s gang catches up with them, and Logan realizes Koh’s true plan. Logan is not amused Koh used him like this, but it’s too late to change anything about it. While Koh and his gang finish the last members of the rival gang, Yukio and Logan reach the gates of the Dragon Palace, where Kikyo awaits them.

Retrieved from "https://marvel.fandom.com/wiki/Marvel_Anime_Season_2_9?oldid=6435548"
Community content is available under CC-BY-SA unless otherwise noted.