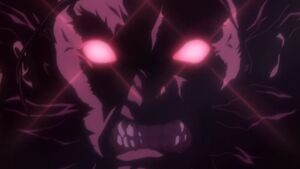 He's been tormented his whole life because of his power. If you think you're going to abuse that power, you're wrong.

The remnants of the Inner Circle have begun their plan to use Takeo's reality-warping powers to takeover the world and make mutants supreme. Hisako uses her armor to badly burn Marsh, leaving him wounded and semi-liquefied. Cyclops blasts Marsh into oblivion. Mastermind places Cyclops into a vision of a world where mutants were wiped out because he failed to kill Jean; he then uses Takeo's powers to capture Storm, Hisako and Sasaki again. Seeing the team taking out their enemies, Wolverine goads Neuron into increasing the amount of pain he can feel, telling Beast to beat him with all his might. The resulting pain sends Wolverine into a berserker rage, in which he only cares about killing Neuron and cannot feel pain. Once Neuron is dead, Beast snaps Wolverine out of his trance; the rage took a lot out of him.

Mastermind restrains the X-Men with Takeo's powers, but soon finds that the spirit of the real Jean broke his mental control over Cyclops. Making matters worse, is that without Mastermind to control him, Takeo goes berserk and kills Mastermind. Takeo morphs into a being of energy and enlarges to the point he destroys the lab. Professor X arrives as well, crashing the x-jet into Takeo. Takeo's powers start warping the entire world.

Retrieved from "https://marvel.fandom.com/wiki/Marvel_Anime_Season_3_11?oldid=4131236"
Community content is available under CC-BY-SA unless otherwise noted.