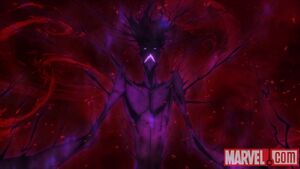 So be it. Then you leave me no choice. God forgive me.

-- Professor X, as he attempts to kill his out of control son Takeo.

Seeing the world falling apart, Professor X tells the people of the world to work together to save each other. He then focuses on trying to undo Mastermind's damage to Takeo's mind; however, Takeo is bitter over the years of seeming neglect from his father. Professor X resolves to kill Takeo and himself in the process to put an end to the madness. However, Hisako uses her armor as a medium to let her happy memories of Takeo enter their minds, allowing Takeo to remember somebody who cared for him. At peace, Takeo seemingly self-destructs and the world is now at peace. Sasaki contemplates suicide as atonement for the virus, but Takeo manages to have her and Professor X have a happy vision of them together as a family.

With the world now ready to evolve after this, the X-Men resolve to continue their work. Although, their ride home is now toast. "Details, details." Storm dismisses. "Easy for YOU to say; you can fly." Wolverine bitterly notes.

Retrieved from "https://marvel.fandom.com/wiki/Marvel_Anime_Season_3_12?oldid=6167533"
Community content is available under CC-BY-SA unless otherwise noted.