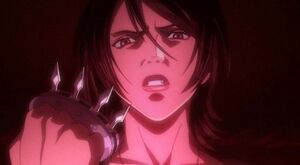 Appearing in "The Man, Blade (His Name is Blade)"

Synopsis for "The Man, Blade (His Name is Blade)"

While recapping his history, Blade saves a drunk man from being preyed upon by a female vampire and some police vampires while looking for a vampire with four fangs. Blade manages to get answers about a vampire organization in Asia and kills the last police vampire upon learning that his boss is coming to the nearby nightclub called Club Feed. A girl named Makoto enters Club Feed drawing the attention of every vampire in the club. Makoto meets the club's owner Radu and brings her to his office. Makoto identifies a familiar smell on Radu and attacks him. Makoto then attacks and slays every vampire in Club Feed while the humans escape. Makoto's father Hayate enters to assist her as Radu assumes his werewolf-like appearance. Just then, Blade appears and slays some of the vampires. Makoto and Hayate arrive as Blade fights Radu while trying to get the info on where Radu's boss is. Blade manages to use his Residual Move to destroy Radu. Makoto and Hayate end up encountering the Existence's leader Deacon Frost who ends up biting Hayate. Blade arrives and confronts Deacon who shows him the scar on his left hand that he got from Blade's mother. Deacon beats up Blade as two of his henchmen take blood samples of Blade before they escape. Hayate ends up turning into a vampire and attacks Makoto only to be killed by Blade. As Blade leaves, Makoto vows to make the Daywalker pay for killing her father.

Like this? Let us know!
Retrieved from "https://marvel.fandom.com/wiki/Marvel_Anime_Season_4_1?oldid=6497630"
Community content is available under CC-BY-SA unless otherwise noted.