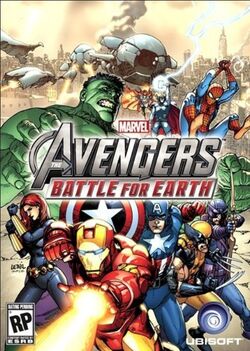 The game's plot is loosely based on the Secret Invasion storyline. In order to save the planet Earth, The Avengers must battle a shapeshifting extraterrestrial race known as the Skrulls. The Skrulls begin replacing Earth's heroes with doppelgangers that not only look like the heroes they impersonate, but have their powers. It is up to the remaining marvel heroes to battle the Skrull impersonators to prevent the invasion of an alien race through an inter-dimensional portal above New York city.

Like this? Let us know!
Retrieved from "https://marvel.fandom.com/wiki/Marvel_Avengers:_Battle_for_Earth?oldid=5503630"
Community content is available under CC-BY-SA unless otherwise noted.