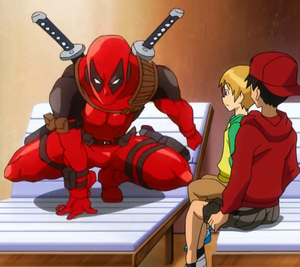 Appearing in "The Forbidden Hero Appears?"

Synopsis for "The Forbidden Hero Appears?"

The infamous mercenary Deadpool visits a Villain joint in Mexico, where he wrecks the place up and steals Iron Fist’s DISK from King Cobra. Upon leaving the place, he addresses the audience with the words that it is ‘his time to shine’.

At the Avengers’ base in Japan, Iron Man is working on new battle armors for the entire team, using the Kree Mact as a power source. Akira receives a phone call from Hikaru, who informs him that Deadpool has just shown up on their doorstep. Tony is clearly not happy to see him, but the team lets Deadpool in anyway. The team is quickly weirded out by Deadpool’s strange behavior, especially his constant breaking of the Fourth Wall. Deadpool shows the team he has Iron Fist’s DISK. However, he only wants to give it to the team if he can become the leader of the Avengers in order to boost his popularity (and get his own Japanese action figures). Naturally, the team refuses.

King Cobra shows up at the base to demand Iron Fist’s DISK back. Deadpool goes outside to fight him (after first failing to jump out the window due to the fortified glass). King Cobra has brought Cottonmouth and Diamondback with him as backup, so the kids D-Smash the Avengers. The villains stand no chance against this many heroes and soon are all back in DISKs. When interrogated, King Cobra reveals that Red Skull released them to be his servants. The team worries how Red Skull could get DISKs while the D-System didn’t pick up any. Cap suggests Red Skull can directly access the other dimension where the DISKs are now, and Tony believes that if this is the case, they can use that to save Dr. Akatsuki.

As Deadpool steps out after using the shower, the team makes it clear to Deadpool that they don’t want him as their leader. Disappointed, Deadpool gives Akira the DISK and leaves, but Akira quickly notices Deadpool tricked him with a fake DISK. Moreover, he also took the DISKs of the Serpent Society with him. Deadpool retreats to a rooftop to lament not being allowed to join the Avengers, and how this show sucks. He is visited by Tiger Shark, who takes the Serpent Society’s DISKs and wants Iron Fist’s DISK as well. Deadpool attacks him with a wide arsenal of firearms. However, using the power of the Dimension Sphere, Tiger Shark shrugs off Deadpool’s attacks and retaliates by manipulating the water of a nearby pool to attack Deadpool. Deadpool surrenders and Tiger Shark prepares to D-secure him. The Avengers arrive just in time to prevent that. They could find Deadpool due to a tracking device they slipped into his suit.

Iron Man bluffs that he will use his new Build Up Armor to fight Tiger Shark, but that, since it’s not tested yet, it could very well blow up and level the entire neighborhood. Tiger Shark doesn’t fall for it, but Red Skull interferes and keeps him from fighting the Avengers any further. He tells the Avengers that he is well aware that, right now, evil can never flourish in the world, but he is about to change that. While the Avengers are left to think about this, Deadpool slips away with Iron Fist’s DISK still in his possession. As he drives off, Deadpool contemplates on what to do with the DISK and asks the viewers if they want it, only to reveal he was kidding as he rides off into the distance.

Retrieved from "https://marvel.fandom.com/wiki/Marvel_Disk_Wars:_The_Avengers_Season_1_27?oldid=5751300"
Community content is available under CC-BY-SA unless otherwise noted.