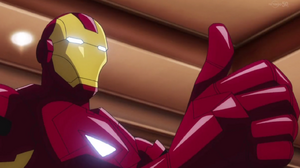 Appearing in "The 5 Goons Strike Back!"

Synopsis for "The 5 Goons Strike Back!"

Jessica, Hikaru and Pepper are at a security conference, where everyone important for the hi-tech security business (including Pepper) has been invited to. Back home, Iron Man, Akira, Ed and Chris are enjoying themselves with some experiments, like trying to make a cheesecake using the lab equipment.

The conference is targeted however by the Celebrity Five and their villains. They disguise themselves as guards and other staff to infiltrate the building. Joel is late however. Hikaru meanwhile gets a lot of attention due to being the son of professor Akatsuki, while Jessica is ignored. To get back at him, she pretends she got a phonecall about Akira being in trouble, but both Hikaru and Pepper think it’s real and call Akira to verify if everything is okay. At that moment, the cheesecake explodes, which only further worries Hikaru and Pepper. Suddenly, Joel Murphy appears on stage at the conference and begins to play his guitar. When he’s done, he introduces his four ‘friends’, thus blowing their covers. Pepper quickly warns Akira, and then retreats to the lobby with Jessica and Hikaru so they can D-Smash their heroes.

The Celebrity Five D-smash Juggernaut, Lizard, and Whiplash to take everyone hostage. Knowing their friends are in trouble, Akira, Ed and Chris + their partners rush to the site of the conference in the Stark Industries Jet. The Celebrity Five reveal the purpose of their attack; they want the passwords for all mainframes in every country and business. Thor and Wasp confront the villains, while the hostages flee. Tim doesn’t seem to mind however and Hikaru realizes something is up. Indeed, it seems that the whole passwords stealing was just a ruse, and Tim actually has other plans that even his fellow Celebrity Five members don’t know about. However, the heroes can’t investigate since they first have to deal with the villains.

Iron Man, Captain America and Hulk also join the fight, and Akira even gives Iron Man his build up armor. Unfortunately, that turns out to be just what Tim truly wanted, and he uses a device to absorb the energy from Iron Man’s attack. The Celebrity Five recall their villains to their DISKs. From the device, a hologram of Loki appears. He tells the Avengers to look forward to his return. The Celebrity Five teleport away and the Avengers head back to base. Akira and Hikaru are glad that, with Loki still being alive, their father is most likely alive too. However, the team wonders what Loki is up to now. Jessica spots the remains of the would-be cheesecake, which embarrasses Chris. Jessica likes it however.

Elsewhere, it turns out the energy from Iron Man’s attack has been stored in a containment unit, with several similar units waiting to be filled. Loki doesn’t want to tell the Celebrity Five yet what he wants this energy for.

Like this? Let us know!
Retrieved from "https://marvel.fandom.com/wiki/Marvel_Disk_Wars:_The_Avengers_Season_1_41?oldid=6826572"
Community content is available under CC-BY-SA unless otherwise noted.