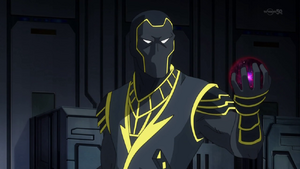 Iron Man explains both Blade and Akira more about the biocodes. Mainly how they are evolving and getting stronger, and that his is what protected Ed, Chris, Hikaru and Jessica from actually becoming vampires. Suddenly a large group of vampires attacks the base while Okuma Jubei and Baron Blood watch from a distance. Iron Man and Blade fight them off. Next, Baron Blood sends the kids to the base. Blade warns Akira that vampires die in sunlight, and although his friends are not actually vampires, due the placebo effect the sun could still have the same lethal effect on them as on real vampires. Pepper suggests they detain the kids in a dark room until Baron Blood is found and defeated. Blade points out that still won’t change anything; the kids won’t rest, drink or eat as long as they believe themselves to be vampires, and thus quickly die of exhaustion and dehydration.

Akira is angry at Blade being so heartless about the whole situation, and states that he and Blade are in the same boat since Blade lost his mother to a vampire. Iron Man asks Blade to help him make a plan. Not much later, Blade leaves the base and Baron Blood orders the kids to attack him. It looks like Blade will slay them, just like Baron Blood hoped. This even makes Okuma feel uncomfortable. Baron Blood decides to take it a step further and orders the kids to D-Smash their partners. The Avengers are shocked to see their partners like this, but are naturally unwilling to let Blade kill them. Blade attacks the Avengers, but this is actually just part of the plan and he quickly tells each Avenger what Iron Man wants them to do. The Avengers restrain their partners, after which Iron Man orders them to use the biocode synchronization that the kids have used in the past to give the Avengers more power. Through the synchronization, the Avengers power up their partners’ biocodes, which in turn expel Baron Blood’s influence over them. All four return to normal.

The process also hurts Baron Blood himself, and his location is revealed to Blade. Akira orders Hikaru to D-Smash Nova. Nova takes Blade to Baron Blood and they fight the vampire together until Nova’s time limit is up. Blade continues the fight alone, defeats Blood, and D-secures him. Okuma teleports away. Back at the base Blade explains that the biocodes have the same effect as the sun. He thanks Akira for his help in taking out Baron Blood. Captain America recalls how he has fought Baron Blood in the past, and promises Blade that they will help him in his mission once Loki has been dealt with. Blade notices the Dimension Hole Gate, and when told what it is he advises the Avengers to quit their attempts to access the Dark Dimension. He has heard nasty rumors about the place. To prove his point, he points his vial of holy water at the gate, which instantly causes the water to turn dark and start boiling. Iron Man is convinced and calls off the experiment for now, much to Akira’s dismay.

Blade departs and Akira is left to mourn the fact that he may now never see his father again. While he is alone in the lab, he hears his fathers’ voice call out to him. Akira activates the Dimension Hole Gate. The portal opens, and out of it comes a man dressed completely in black. The man immediately seizes the Dimension Sphere. Akira D-smashes Iron Man who tries to fight the mysterious man, but in the battle Iron Man is hit by some dark energy from the Dimension Sphere and collapses to the floor. Before leaving the base with the sphere, the man identifies himself as Ronin.

Like this? Let us know!
Retrieved from "https://marvel.fandom.com/wiki/Marvel_Disk_Wars:_The_Avengers_Season_1_43?oldid=6826576"
Community content is available under CC-BY-SA unless otherwise noted.