"Farewell, Heroes of My Heart!" 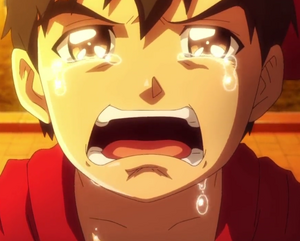 Appearing in "Farewell, Heroes of My Heart!"

Synopsis for "Farewell, Heroes of My Heart!"

Loki has D-secured Dormammu, and now uses his DISK in combination with a new, portable version of the DISK power absorption system, to absorb Dormammu’s powers for himself.

The Guardians of the Galaxy attempt to fight Loki, but with his new powers he easily defeats them. He then targets the helicarrier, where the Avengers confront him while Maria Hill broadcasts the battle all over the world. The Avengers don’t fare any better than the Guardians of the Galaxy, as Loki easily shrugs off everything they throw at him. Nick Fury realizes the Avengers won’t make it on their own, and gives the kids their DISK wrist bands, the Avengers’ old DISKs, and the Build Up Plates. The kids biocodes are temporarily restored (which also restores the Avengers to full health), and they give their former partners their Build Up Armors. All Avengers unleash their full power on Loki, who finally appears to be defeated.

Tony tries to D-Secure Loki, but the trickster god still has enough power to fight back and shoots the DISK out of Tony’s hand. He powers up again and resumes the battle. Giant Man, Hawkeye and Black Widow join the Avengers, but are also no match for Loki. Soon, only Iron Man is left standing. He grabs Loki and flies him away from the Helicarrier. The two crash land on Techno Isle. The crash damages Tony’s armor, rendering him helpless against Loki. However, Iron Man gets unexpected help; Silver Samurai and Mandarin show up to combat Loki since they both want the honor of defeating Iron Man themselves.

As the villains fight each other, Professor Akatsuki suggests they use the Kree Mact to restart Tony Stark’s armor. Against Akatsuki’s orders, the kids board the Stark Industries Jet and head for Techno Isle to deliver the Kree Mact to Iron Man. When they get close enough, Akira dons his Booster Skates and leaves the jet. Loki D-Smashes an army of Mindless Ones to stop him, but Akira in turn receives backup from Spider-Man, Blade, and the Guardians of the Galaxy. The heroes defeat the Mindless Ones and clear a path for Akira. Akira safely reaches Iron Man while Mandarin and Silver Samurai restrain Loki. The Kree Mact restores Iron Man’s armor to full strength. The final clash between Loki and Iron Man begins.

Iron Man grabs Loki and fires his ultimate unibeam at point blank range. Loki finally goes down. On the ground, all the Avengers and their partners confront him. The whole world has seen the battle, and everyones hope has extinguished Dormammu’s power within Loki. Just before he is D-Secured by Akira, Loki D-Smashes one last squadron of Mindless Ones. However, Dr. Strange uses his magic to freeze them, and all Mindless Ones are D-secured as well.

With Loki’s defeat, the adventure is finally over and it’s time for the kids and Avengers to part ways, for now. Akira is sad he won’t be seeing Iron Man, whom he has come to consider a second father, anymore, but plans to one day build his own suit of Armor. 3 months later, Chris has decided to become a defense attorney, Jessica has launched her own fashion line and won a young fashion award with it, Ed reported the whole adventure on his superhero website and starts exercising to build up some muscle, and the Akatsuki brothers are studying while part-time assisting their father with his work for S.H.I.E.L.D.. The Celebrity Five somehow escaped the Dark Dimension and are back to their old tricks. Then, someday, Iron Man shows up at Akira’s school since the Avengers need his help with a new emergency.

Retrieved from "https://marvel.fandom.com/wiki/Marvel_Disk_Wars:_The_Avengers_Season_1_51?oldid=6103689"
Community content is available under CC-BY-SA unless otherwise noted.