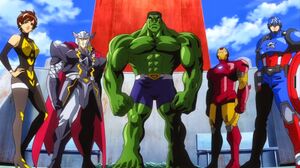 The episode opens with a flashback to when Tony Stark, Peter Parker and dr. Akatsuki were still working on the DISKs. The project presented a lot of complications to overcome. Among other things. Dr. Akatsuki suggested the use of Pym Particles, but Tony refused this request. Akatsuki eventually overcame the main problem for the DISKs by introducing the class system. Akatsuki frequently expresses his homesickness, and how he wishes to be a better father for his kids when he can finally see them again. This inspires Tony to hold a great party for the official unveiling of the DISKs, and invite both Akira and Hikaru over.

Back in the present day, Tony explains that Akira can’t D-smash Hulk’s DISK because his biocode is for tech class DISKs only, and Hulk is a Power Class. With summoning Hulk being no option, Iron Man insists that Akria D-smashes him so he can try to breach the tornado and reach the ship, taking Hulk’s DISK and the final biocode bracelet with him. Akira agrees. On board the ship, the Celebrity Five are awaiting the arrival of Loki. King Cobra has found and captured Jessica, and taken Wasp’s Disk. Joel Murphy orders Abomination to bring him Spider-Man so he can be D-secured.

Deploying his force field, Iron Man barely makes it through the tornado. However, he loses the bracelet and Hulk’s DISK, the latter of which is then found by Edward. Jesscia spots Edward and bites King Cobra’s tail to escape. She tosses Ed the bracelet, and Ed quickly D-smashes Hulk onto the ship. Terrified, Tim Gilliam orders the villains that are still fighting Spider-Man to come to his aid, leaving the beaten and unconscious Spider-Man behind. Diablo attempts to regain control over the Hulk, but Hulk manages to resist his attempts, grabs the villain, and tosses him into Whirlwind. This disrupts the Tornado, allowing the others to reach the ship. Thor and Captain America immediately join Hulk and Iron Man. Jessica manages to get Wasp’s DISK back and D-smashes her to. Now with the entire Avengers team complete again, the fight against the Celebrity Five and their villains can begin.

Retrieved from "https://marvel.fandom.com/wiki/Marvel_Disk_Wars:_The_Avengers_Season_1_8?oldid=5558203"
Community content is available under CC-BY-SA unless otherwise noted.