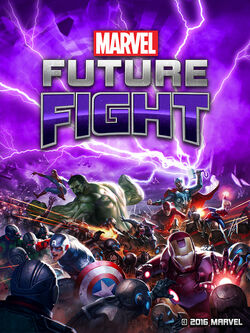 Thor arrives in Midtown, Manhattan at the request of Black Panther to find it threatened by hordes of HYDRA agents and a massive purple vortex, and wonders, why the Avengers, weren't summoned earlier. T'Challa posits that S.H.I.E.L.D. may be paralyzed and that Thor and Black Bolt were the only ones T'Challa could reach. When asked by Thor what had happened, T'Challa answered that there had been a mass invasion and that it was worse than anyone could have imagined. Eventually, they come across the corpse of Steve Rogers and his killers: alternate versions of themselves. Engaging in battle, both trio's disappear in a flash of white and purple light, and the reality is presumably destroyed.

Elsewhere, Jocasta has traveled to the past with a complete record of all that had just transpired. She claims to have been sent from the future by Nick Fury with a video message for the player. Fury tells the player that the world is in danger from an unknown enemy and that the heroes and villains of the future failed. As he is dying, he adds that everything will end and he couldn't figure out why. As he laments his failure, he tells the player that they are his last hope and that his Hail Mary pass is having Jocasta send them even further back to before the apocalypse. Regrouping at a S.H.I.E.L.D. safehouse, Jocasta tells the player that they are the new leader of Nick Fury's most trusted team; Captain America, Steve Rogers, Iron Man, Tony Stark, and Black Widow, Natasha Romanova.

However, the system used to contact both Iron Man and Black Widow was corrupted and was unable to contact Captain America. Jocasta and the player do recover the data through simulation and recruit all three heroes to their team. Jocasta also informs the player that Fury intended for both heroes and villains to collaborate in the face of the apocalypse. And then the player chooses their codename.

Retrieved from "https://marvel.fandom.com/wiki/Marvel_Future_Fight?oldid=6084905"
Community content is available under CC-BY-SA unless otherwise noted.