Catching the Ghost-Spider is my number one priority, even if it's not me who brings her in.

The NYPD surround an apartment building where their leader calls out to the fugitive vigilante Ghost-Spider to surrender. Suddenly, Ghost-Spider bursts through a window and webs up all the officers before swinging away.

Footage of this incident is shown to S.H.I.E.L.D. agents Daisy Johnson and Shaun Lucas aka Patriot from Captain George Stacy. Stacy is determined to catch the Ghost-Spider after she murdered his daughter's best friend, Kevin, but is humble enough to admit that S.H.I.E.L.D. is more suited to this task than the NYPD. Daisy suggests that Ghost-Spider isn't working alone and rewinds the footage, showing at the instant she breaks through the window, it gets darker inside the building. Stacy insists that it's a trick of the light, as his officers combed the entire building and found no one else. Patriot takes this to mean that catching Ghost-Spider will be easy, but Stacy begs to differ, as his analysts believe Ghost-Spider to have a military background. And he hopes that two of Captain America's proteges can catch the most cunning and elusive villain of all time.

Little does Stacy know that Ghost-Spider is in fact his own daughter Gwen. Having fallen asleep in her garage while in costume, she is startled by her band, the Mary Janes, entering and quickly changes into her civvies before they can spot her. When asked why she looks like a mess, she jokes that she was chased by a SWAT team for six city blocks, causing them to burst out laughing. The episode ends with the Mary Janes practicing. 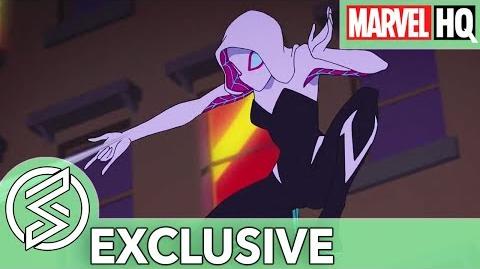