What, you think my dad stops doing the right thing just because it's dangerous?

The Mary Janes finish band practice. As they wrap up, Gloria approaches Gwen, insisting they talk, as Gwen had been distant since her best friend Kevin's death; flashbacks show Ghost-Spider being there for Kevin's death and funeral. Gwen tries to deflect but when Gloria presses the issue, she states that nothing can change the fact that her best friend was murdered and that she's trying to catch the real killer. However, Gloria believes her alter ego, Ghost-Spider, to be responsible and thinks Gwen is in denial; another flashback reveals that Kevin knew of Gwen's secret identity. She does acknowledge that even if Ghost-Spider is innocent, the real killer has powers where Gwen does not. Gwen then gives Gloria a reassuring hug before sending her away and gearing up.

As she swings through the city as Ghost-Spider, it is revealed in a flashback, when the police cornered her last night, she was fighting Kevin's true killer, an Inhuman woman with glowing knives. Just as she demands to know why she killed her friend, the killer was revealed to have an ally who rams Ghost Spider through the window right into the awaiting SWAT team.

Just as Ghost Spider finishes reminiscing, she is ambushed by Patriot, who declares her under arrest by order of S.H.I.E.L.D. They have a brief tussle before Ghost Spider gives him the slip. Patriot then radios Daisy to tell her that their quarry refused to come peacefully. 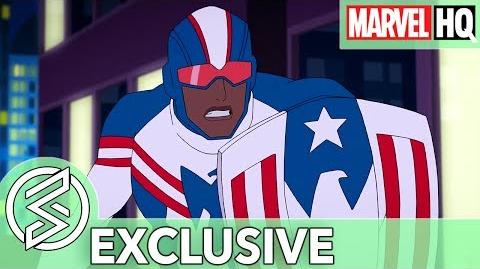