Yes! Wait, no. Doreen, we need to actually team up first, and my hero watch app tagged the perfect foe. Someone just marked Ghost-Spider fighting a couple blocks away right now! What better first mission than bringing in an ex-superhero?

Doreen Green patiently awaits her friend Kamala Khan. However, her trusty squirrel sidekick, Tippy-Toe, attempts to get at her box of cupcakes she was saving for their first superhero team-up. Before Tippy could touch the box, it slips off Doreen's hand and onto Kamala's. Excitedly hugging her best friend, Doreen suggests they celebrate with a cupcake. Kamala nearly agrees before pointing out they need to team-up first. She then brings up her hero watch app, which had marked Ghost-Spider fighting a couple blocks away. Then suddenly, their quarry falls from the sky above them, causing the duo to hop to avoid getting hit. As Kamala accidentally drops the box, Ghost-Spider catches it for her and set it on a bench. She then attempts to web-swing away, only for Doreen to sic Tippy on her, biting off every webline she shoots to keep her from escaping. As Ghost-Spider engages in comically battling Tippy, Kamala and Doreen decides to sample one cupcake each before changing into Ms. Marvel and Squirrel Girl. After Squirrel Girl makes a dramatic introduction that bores Ghost-Spider into a false snore, Ms. Marvel diplomatically suggests she turn herself in if she is truly innocent. Ghost-Spider states that she's not out to prove anything to them and attempt to wall crawl away, so Ms. Marvel catches her with her hands. Ghost-Spider quickly slips out as Squirrel Girl declares she's not going anywhere. Ghost-Spider dares them to take their shot at her. Squirrel Girl then breaks the fourth wall, asking the audience if they will capture or lose the Ghost-Spider before Ms. Marvel breaks her monologue, so they simply utter a battle cry and leap into action. 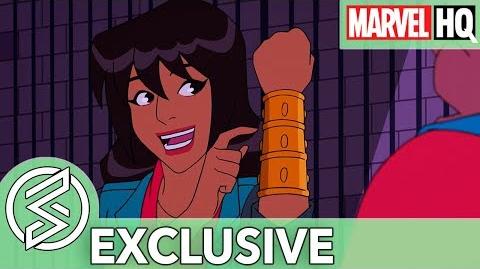 Retrieved from "https://marvel.fandom.com/wiki/Marvel_Rising:_Initiation_Season_1_3?oldid=5229942"
Community content is available under CC-BY-SA unless otherwise noted.