"The Stories They Tell"

One chance, Ghost-Spider, you tell us what really happened, and if we believe you, we'll let you go. If we don't, we're taking you in for what you did to that kid.

Ms. Marvel and Squirrel Girl decide to give Ghost-Spider a chance to explain her side of story if she is indeed innocent of the murder she is accused of, then they'll let her go free, otherwise they'll turn her in. As Squirrel Girl gets started on taking responsibility, Ghost-Spider insists that she's been spending her time trying to catch the real killer and won't let anyone stand in her way.

She explains that the victim, Kevin, was her best friend since second grade summer camp, the only one who knew about her powers. They later discovered he was an Inhuman after he was affected by the Terrigen wave, causing him to develop cryokinetic abilities. Because he desire to follow her example and use his powers for good, Ghost-Spider help train him.

When Kevin was absent on the night of their first patrol, Ghost-Spider tracked his phone to a warehouse where she found him dead on the floor. Her spider-sense then alerted her to an ambush from his killer, an Inhuman woman with glowing knives. During their fight, Ghost-Spider got grazed by one of her knives, causing her to feel as if the life was sapped out of her, forcing her to flee. Worse, because the knives never left a mark on Kevin's body, the police assumed him and Ghost-Spider to have been alone in the warehouse and thus she received all the blame.

With Ghost-Spider's story at an end, Ms. Marvel is willing to believe her, as she's heard of Inhumans possessing more bizarre powers. However, Squirrel Girl remains skeptical, suggesting this could all be a lie. Ghost-Spider then pulls up her sleeve to reveal a commemorative friendship bracelet, winning her over. The duo offer to help Ghost-Spider catch Kevin's true murderer, but she declines, as she doesn't want the authorities hunting the both of them by association with her. Though Ms. Marvel argues that it's still the right thing to do, Ghost-Spider says there are many right ways but until she clears her name, she can't help New York City the way she should. However, she insists that Ms. Marvel and Squirrel Girl are the right heroes for the job.

The Squirrel Scouts then alert them to Patriot flying overhead, so Ghost-Spider decides to make her exit. Before web slinging away, she requests they at least save a few muggers to defeat for herself. Ms. Marvel sarcastically says between the two of them, that's not likely to happen. 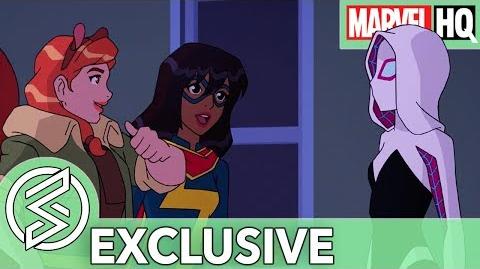