Episode Title
"The Secrets We Keep"

Why did you let me go, Agent Johnson?

Appearing in "The Secrets We Keep"

Synopsis for "The Secrets We Keep"

Ghost-Spider is relieved that Ms. Marvel and Squirrel Girl believe her to be innocent before remarking that she still has to convince everyone else in New York. Patriot then surprises her, stating that he's not that gullible. He once again demands her surrender. Ghost-Spider then attempts to glide away but he grapples with her in mid-air. Their fight soon moves to the ground, where Ghost-Spider is hit from behind by Quake, who then cuff her. As she is led into their flying car, Ghost-Spider insists the Inhuman woman with life-sucking knives was Kevin's true killer. This catches Quake's interest, but her partner tell her not to listen, saying the guilty are always innocent when in handcuffs.

The S.H.I.E.L.D. agents bring Ghost-Spider to hand over to Captain Stacy. Not wanting to face her father, Ghost-Spider begs them to take her around back and promises to answer all of their questions but they ignore her. As the fugitive is brought before him, Captain Stacy, still wholeheartedly certain of her guilt, declares he will lock her away in the deepest, darkest cell he can find for eternity. But as he is about to unmask her, Ghost-Spider suddenly slips out of her cuffs and webs both his and Quake's mouths and slips away. Stacy is not happy with the agents that a piece of faulty tech let their fugitive escape and demands to speak with their commanding officer.

Ghost-Spider later accosts Quake while she's off-duty. Knowing Quake subtly quaked her power-dampening cuffs off, she asks why she let her go. Quake says the official story was that a bolt shook loose. She further explains that she had deduced Gwen's secret identity as Ghost-Spider from the way she reacted when her father talked her. Furthermore, Quake has been running a side project tracking Kevin's killer and asks Gwen to tell her everything about this Inhuman woman and her accomplices, especially any teleporters, as she suspects something bigger is going on. 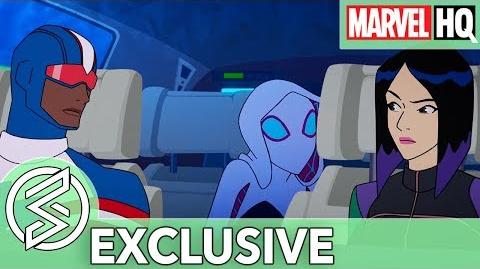 Retrieved from "https://marvel.fandom.com/wiki/Marvel_Rising:_Initiation_Season_1_6?oldid=5229950"
Community content is available under CC-BY-SA unless otherwise noted.