Appearing in "The Return of the Vulture"

This story is a reprint of the comic
Amazing Spider-Man #7.

Synopsis for "The Return of the Vulture"

This story is a reprint of the comic
Amazing Spider-Man #7.

Following his defeat at the hands of Spider-Man, the Vulture has been spending his time in prison secretly smuggling parts from the prison machine shop into his cell so that he can recreate his flying technology, this time correcting the flaw which caused his defeat last time. Perfecting the device, the Vulture breaks out of prison.

When Peter Parker hears about this break-out, he goes after the Vulture as Spider-Man. Hoping to use the same device that defeated the Vulture before, Spider-Man is shocked to find that the Vulture corrected the flaw in his device. The Vulture easily defeats Spider-Man, and Spidey injures his arm in the process and has to come up with an excuse for it as Peter Parker.

Later when Peter is trying to sell his Vulture pictures to J. Jonah Jameson, the Vulture arrives demanding that Jameson gives over the company's payroll. While Jameson argues with the crook, Peter slips away and changes into Spider-Man. He then battles the Vulture all over the Daily Bugle building. When Spider-Man attaches a web line to the Vulture, the Vulture takes him high above the city.

There Spidey uses his webs to pin the Vulture's wings and the two begin to fall. However, Spidey weaves a web parachute and saves them from harm. He then turns the Vulture over to the police. When Jameson yells at Spider-Man for causing chaos in his newspaper, Spider-Man shoots webbing in his mouth before leaving to change back into his civilian guise. He then sneaks back into the office and "hides out" with Betty Brant as Jameson storms through the office, trying to get the webbing off his mouth. 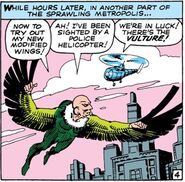 Retrieved from "https://marvel.fandom.com/wiki/Marvel_Tales_Vol_2_144?oldid=5241434"
Community content is available under CC-BY-SA unless otherwise noted.