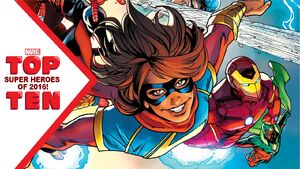 What Super Hero made the most impact during 2016? Find out in Marvel’s Top 10 Super Heroes of 2016. Will it be someone from the new teen super group the Champions? Perhaps a hero or villain from Civil War II? Maybe it’s an all-new character that joined All-New Marvel NOW!? Watch to find out! Who are your Top 10 Marvel Super Heroes of 2016?

Like this? Let us know!
Retrieved from "https://marvel.fandom.com/wiki/Marvel_Top_10_Season_1_19?oldid=6498054"
Community content is available under CC-BY-SA unless otherwise noted.