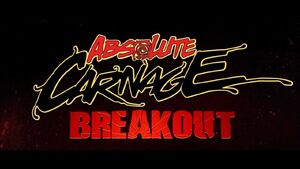 Why are we still talking about Norman Osborn, and his pathetic costumed attempts at killing Spider-Man?

Norman Osborn’s compulsion to destroy Spider-Man led to him joining with the Carnage symbiote to become the Red Goblin! But when he was defeated and the symbiote was violently ripped from him, it broke his psyche and made him believe he was Carnage’s primary host, the psychotic killer Cletus Kasady. He was locked away in the Ravencroft Institute, but you can’t keep an Osborn--or a Kasady, for that matter--down for long…

Like this? Let us know!
Retrieved from "https://marvel.fandom.com/wiki/Marvel_Ultimate_Comics:_Absolute_Carnage_Season_1_1?oldid=6498075"
Community content is available under CC-BY-SA unless otherwise noted.