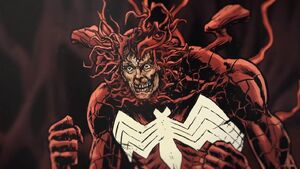 I am Cletus Kasady!

When the Carnage symbiote was ripped off of Norman Osborn his mind broke, causing him to believe he was the symbiote’s main host, Cletus Kasady. Norman was sent to Ravencroft, where Dr. Treadwell was trying to cure him when the real Cletus broke Norman out and sent him on a mission to bring Cletus Norman’s grandson Normie. It did not go well.

Retrieved from "https://marvel.fandom.com/wiki/Marvel_Ultimate_Comics:_Absolute_Carnage_Season_1_4?oldid=5894013"
Community content is available under CC-BY-SA unless otherwise noted.