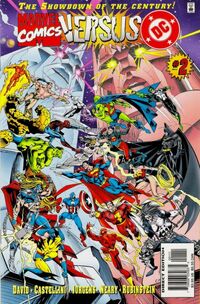 See Also: Marvel Versus DC Vol 1 for the comic issues.

The Amalgam Universe is a parallel universe created and destroyed as a result of a cross-Multiversal conflict between cosmic beings. It was a combination of Earth-616 and the DC Universe.

When two entities known as the Brothers (the embodiments of both the Marvel and DC multiverses) remembered each other's existence they pitted combatants from their respective realities together. The winner would then destroy the loser (and its own respective multiverse), to prevent this from happening, the Living Tribunal and the Spectre joined forces and combined the two universes together, creating the Amalgam universe. This universe had its own unique history which was a combination of both multiverses.

With the help of the hero named Access, the Living Tribunal and the Spectre managed to separate the two realities once more and the Amalgam Universe ceased to exist.

Retrieved from "https://marvel.fandom.com/wiki/Marvel_Versus_DC?oldid=2286386"
Community content is available under CC-BY-SA unless otherwise noted.