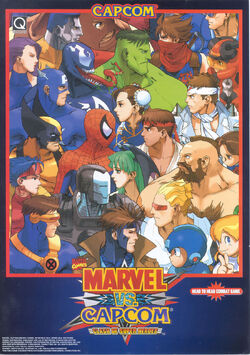 Professor X calls out for heroes to stop him before he merges with the consciousness of Magneto and becomes the being known as Onslaught, the final boss. In the meantime, M. Bison is planning to absorb the power of Onslaught for himself.

It was a popular tournament game at the height of its popularity having monthly tournaments at various locations.

Like this? Let us know!
Retrieved from "https://marvel.fandom.com/wiki/Marvel_vs._Capcom:_Clash_of_Super_Heroes?oldid=6462048"
Community content is available under CC-BY-SA unless otherwise noted.