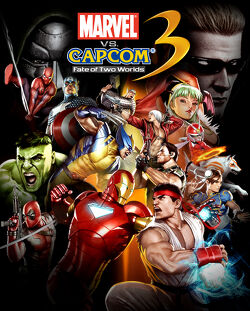 The game features new and returning characters to the Marvel vs. Capcom series, with accompanying promotional artwork by Capcom artist Shinkiro. The final retail build of the roster will feature 36 characters (not including DLC). Capcom has stated that they plan to expand the roster by the time the game is released, and are "working hard to include as many characters as possible". After the most recent announcements of Sentinel and Hsien-Ko to the roster, the official website for the game has stated that there are more characters still to be revealed. Also, the roster is stated to be finalized, but possible fan demand might affect the DLC. Returning characters have distinct playstyle changes, such as Hulk being able to perform steady air combos, Captain America's shield hitting back on the return after being thrown, and Iron Man's new stance and Proton Cannon firing at a 45° angle.

Characters are listed by company, and placed in order of the date they were revealed. An asterik (*) signifies a new playable character to the Marvel vs. Capcom Series. 2 asterisks (**) also signifies a sub-boss as well. 3 asterisks (***) is an unplayable final boss.

Ten years after Ruby Heart's adventure and Abyss' defeat, an unknown entity has been awakened, and together with help from Victor Von Doom and Albert Wesker, they recruit known villains and make an operation to unite and rule both dimensions. Now it'll be up to Wolverine, Ryu, and the rest of the Marvel and Capcom heroes to join forces once again in order to stop this new enemy before everything should be destroyed.

Italics indicates characters which will appear in the Ultimate version without having appeared in the standard.

Marvel vs. Capcom 3: Fate of Two Worlds was first announced at Capcom's Captivate press show in Hawaii in April 2010, with the game's public reveal following one week later after the company's imposed information embargo. The game was revealed to have been in development since the summer of 2008 when Capcom re-acquired the Marvel license after a period of legal issues that placed the series on hiatus for nearly a decade. In 2009, The Walt Disney Company bought Marvel for USD $4 Billion, but the buyout did not affect the development of the game. Ryota Niitsuma, who had previously headed production on Tatsunoko vs. Capcom: Ultimate All-Stars, signed on as director and producer of the new project, which was green-lit after "years and years of unrelenting fan demand". Niitsuma stated that they built the game from the ground up using the same MT Framework game engine seen in Resident Evil 5 and Lost Planet 2, which he describes as "the biggest engine that a fighting game has ever had under the hood". Capcom's design philosophy for Marvel vs. Capcom 3 was to make a game that would reach out to those who have been long-time fans of the series, but at the same time expand their user base to those who may be familiar with the characters represented but not with fighting games in general. In particular, company president Keiji Inafune expressed a desire to appeal to a worldwide audience. Unlike previous titles in the series, Capcom currently has no plans for an arcade release, and will initially focus only on console versions for the PlayStation 3 and Xbox 360. This game is expected to sell 2 millions units of Marvel vs. Capcom 3 worldwide across both platforms.

In addition to the complete transition to 3D models, several characters also sport updated designs. Iron Man now sports his Extremis armor as opposed to the Modular Armor he wore in the previous titles, Wolverine now wears his John Cassaday-designed costume from the more recent Astonishing X-Men rather than his '90s era costume, and Captain America now wears a belt with pouches. Employees from Marvel have been working closely with Capcom's art design team to ensure that each character from their company is properly represented. Both Marvel and Capcom have discussed the possibility of a comic book adaptation of the game by UDON, which project manager Jim Zubkavich stated would most likely be in the form of a four to twelve issue mini-series (the prequel comic to the supposed mini-series is available in the Collector's Edition).

The game features the same tag-based team feature as previous installments of the series, where each player chooses three characters that can be swapped at any point during a match, and utilizes an order selection called "Evolved Vs. Fighting System", a modified version of earlier systems seen in other Marvel/Capcom and Capcom vs. SNK crossover games. It is the first game in the franchise to feature three-dimensional character models as opposed to two-dimensional sprites, though gameplay remains restricted to two-dimensions, allowing characters to move only backward, forward, or straight up into the air. Unlike Marvel vs. Capcom 2, which features four attack buttons separated as two pairs of low and high-strength punches and kicks, Marvel vs. Capcom 3 uses a simplified, three-button control scheme of undefined low, medium, and high attacks modeled after Tatsunoko vs. Capcom: Ultimate All-Stars, which Capcom believes will "knock down the wall of complicated controls and open up the field of strategic fighting to all comers", as well as a new "Exchange" button used to launch opponents into the air, switch characters while performing a combo, and slam the opponent into the ground when used by certain characters. Players can use each button to string together combination attacks, as well as perform special moves using a combination of button presses and joystick movement. As characters attack, their Special Gauge fills with energy which can be expended by the player to execute powerful Hyper Combos and Team Combos that involve multiple characters.

Ryota Niitsuma, series creator, stated at E3 2010 that the game will feature a single-player story mode that is more robust than its predecessors, with unique endings for each character. In between battles, characters will meet, interact, speak, and travel with other characters. There will be CG Animated Scenes of the characters speaking to each other with full voiceovers.

Marvel has also stated that Marvel vs. Capcom 3 is "all about fan service", and plan to work with Capcom to include dialogue quips and mid-match events between the company's characters that reference past Marvel Comics storylines. Marvel vs. Capcom 3 will include an online play mode using Microsoft's Xbox Live and Sony's PlayStation Network services.

Although subtle and not really given much attention, each Marvel and Capcom character announced implies that they would be the rivals to each other. Many of these characters even have special quotes they say to each other during match (see also: Special Conversations)

At New York Comic-Con, it was announced that Marvel writer Frank Tieri will be writing the game's story. The actual storyline is about Dr. Doom and Albert Wesker summoning various villains from their universes to try and take over the universes of their respective franchises, but in the process, awaken a mighty force (Galactus) that threatens to destroy both worlds. Now, it is up to the heroes of both worlds to stop this threat before it is too late.

Niitsuma has confirmed that a third of the potential roster will consist of characters who did not appear in the Marvel vs. Capcom franchise.

Characters confirmed by Niitsuma to be absent from the game have so far included Tyrant and Nemesis of the Resident Evil series, citing concerns that their inclusion would change the game's content rating.

The primary members of Marvel's Fantastic Four were excluded at the company's suggestion for currently undisclosed reasons, although it could be argued that it's because Super-Skrull has all their powers, thus giving all of the Fantastic Four representation within Super-Skrull. (Niitsuma stated that the Human Torch was a completed character and originally considered to be on the roster, but his animations consumed a lot of memory. So Marvel suggested Super-Skrull to be his replacement and retained his model, animations, hyper combos slated for the Human Torch. The Thing was also considered at one point, but Capcom felt he would be too similar to the Hulk.)

Seth Killian has stated that original characters Amingo, Ruby Heart and Sonson from Marvel vs. Capcom 2 were absent. The final character roster is said to be around 40.

It has also been stated that:

and characters from the following Capcom series:

will not be playable, but it is possible that they will make stage and ending cameo appearances.

Mega Man X was once originally confirmed to be absent at the Penny Arcade Expo, although it has recently been confirmed that Zero will have an alternate color/costume that closely resembles Mega Man X. (see also: Alternate Costumes)

Capcom and Marvel have officially announced Ultimate Marvel vs. Capcom 3 for both Playstation 3 and Xbox 360. Capcom claims, "Every epic character from the original blockbuster returns to the fray alongside 12 new fighters, 8 over-the-top new stages, enhanced gameplay,and more surprises to be announced." There will be 6 characters from the Marvel side and 6 from the Capcom side.

Starting on Monday December 19, 2011 a new mode called "Heroes and Heralds" will be automatically uploaded to the Ultimate Marvel vs. Capcom 3 games. Part of this mode is that various cards based off of Marvel and Capcom characters that consists of former playable characters from the previous games and new characters from both companies that were never used before in the Marvel vs. Capcom series will be included as cards. These cards can provide power ups for the character teams like power bonuses, regenerating life or Hyper Combo bars, and other special abilities. Only 3 cards may be assigned at a time for a battle and can be switched between battles. Whichever card is chosen as the main card will receive an additional power-up of it's abilities.

The following characters can only be used as Player Cards in Heroes and Heralds mode.

In 2013, due to the expiration of the license between Marvel Comics and Capcom, all downloadable content and digital copies of all Marvel vs. Capcom-related games were removed from the Playstation Network and Xbox Arcade.

Following the renewal of their partnership and the announcement of Marvel vs. Capcom: Infinite, Ultimate Marvel vs. Capcom 3 was redeveloped and re-released on the Playstation 4 on December 3, 2016 as a Digital Release only, with an Xbox One and PC worldwide release planned for March 7, 2017.

The new release also contains all the previous downloadable-exclusive content as well.

Retrieved from "https://marvel.fandom.com/wiki/Marvel_vs._Capcom_3:_Fate_of_Two_Worlds?oldid=5604560"
Community content is available under CC-BY-SA unless otherwise noted.