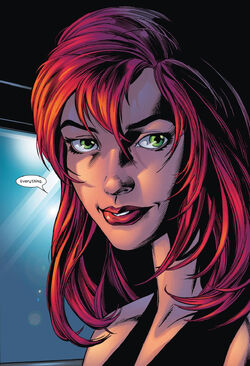 Mary Jane Watson attends Midtown High School with Peter Parker and Liz Allan. Though originally known as "Mary" to her friends, she later picked up the "MJ" nickname. MJ is a brilliant student. She usually expresses her true feelings, though she can be short-tempered and has even physically attacked some of the bullies at her school. At one time, MJ expressed her wish to become an actress, but now dreams of being a "Teacher who Cares".[citation needed]

Mary Jane had engaged in a brief romance with Harry Osborn before she began dating Peter Parker.[4] She became the second person to learn of Peter's secret identity as Spider-Man and the first Peter revealed it to. She sewed Peter's spare costumes, once calling herself the Betsy Ross of superheroes. Although Peter and MJ loved each other very much, Peter's secret identity proved a heavy burden on their relationship.[citation needed]

Breakup with Peter and Reconciliation

Later, Peter began to fear for Mary Jane's safety more than ever when the Green Goblin kidnapped her in a twisted attempt to gain Peter's allegiance and flung her off the Queensboro Bridge. MJ survived, but was left traumatized. During this time, she became angry and jealous when she thought that a new girl, Gwen Stacy, had feelings for Peter and ended their relationship,[5] although they soon reconciled.[6] When MJ's father read her diary and found her referring to something as the "bridge accident" where she was nearly killed, he told MJ that she could not see Peter anymore. Furious, MJ ran away to an old factory but Peter found her. Her parents separated soon after.[citation needed]

One day at the mall, Gwen having recently found out about Peter's secret identity, met up with MJ and had a talk. She realized that MJ was jealous and thought she was vying for Peter's affection and told her that she only loved Peter as a Super Hero little brother clearing things up between them with MJ even thinking to be friends with her. That moment would never come. Later that night while walking back to her house, Gwen was attacked and killed by Carnage, who was created by Dr. Curt Conners using Peter's DNA. Peter felt guilty about what happened to Gwen and started slowly drifting away from Mary Jane fearing now more then ever for her safety fearing that she would be killed too because of his life as Spider-Man. Long after his father was gunned down as the Green Goblin, Harry told her that Peter killed his father. Peter ended the relationship after realizing his life as a superhero would always endanger her.[7] Shortly thereafter, Mary Jane went out with Mark Raxton. After one date, however, she planned to prove herself to Peter and to get him back. When Raxton asked what was so special about Peter, she simply replied "everything". She had difficulty moving on from Peter and dealing with the state of their friendship, especially when Peter began dating Kitty Pryde. However, Peter showed an interest in reconciling their differences, and becoming, if not a couple, friends again.[citation needed]

Clone Saga and Reuniting with Peter

MJ was kidnapped from her bedroom by a facially disfigured clone of Peter Parker, who was determined to give her powers so that she would no longer be in danger from his enemies. He pumped into her bloodstream an unknown amount of OZ, the drug responsible for the creation of the Green Goblin, Hobgoblin and also Spider-Man. Upon learning this, she became very angry and transformed into a huge, hairy, horned red goblin-like creature.[8] However, when the real Peter Parker and Spider-Woman showed up, she calmed down and resumed her original form, just in time for Peter to render his evil clone unconscious. MJ was taken to the Fantastic 4's Baxter Building where she woke up afraid and angry, causing another transformation. However when she spotted the Peter clone who was in the building, she calmed down once again and reverted back to her normal self. She was then given what was believed to be a cure to the effects of the OZ formula.[citation needed]

Peter and MJ rekindled their love, much to Kitty's dismay. Although MJ seemed physically cured, the ordeal left her traumatized, and she was affected by panic issues and haunted by the scarred visage of Peter's disfigured clone. Sue Storm suggested that Peter keep a close eye on MJ and seek a psychiatrist to help her get through her traumatic episodes. However, MJ watched Peter talking to Kitty and it made her mad. Her hand started to tremble and her fingernails briefly became claws, but she calmed down when Kitty took off in anger, indicating that her cure might not have been permanent or even complete. However, considering that the source of the OZ was from Doctor Octopus and not from Norman Osborn, it's possible that the OZ used on her was altered in some way.[citation needed]

Mary Jane decided to actively pursue a career in broadcast journalism, and she began a series of web-cast reports on-location in New York with Peter as her cameraman, only to constantly flub her surname, causing her to lose her temper, much to Peter's amusement. She eventually helped Kitty Pryde track down Peter when he was captured and unmasked by the Shocker.[citation needed]

Peter, despite knowing that he and MJ loved each other, knew that they weren't ready to go to the next level of their relationship, so the idea of them taking it to the next level was postponed. Mary Jane showed knack as a detective, as she figured out that a police officer was on the take from someone, whom the NYPD has dubbed "Mysterio", and had the crooked cop set up surveillance equipment to the police department after Peter informed MJ of the police chase. Mysterio later escaped, but not before he vowed to get even with Spider-Man.[citation needed]

After the events of Ultimatum, Peter was missing. When all that Kitty and Spider-Woman found in the wreckage was his mask, MJ assumed the worst. However, Captain America later found Spider-Man alive under some wreckage.[citation needed]

Mary Jane would regularly avoid Peter and Gwen from that point on. She worked for a short time at a store when she attracted the attention of her boss, her boss tried asking her out and at that point she realized she still wanted Peter, but, that thought didn't stop a player from trying to get her to get in his car. She rejected the offer and was almost killed when Kitty Pryde disguised as a new super hero came to save her and beaten up the player and his friends.[citation needed]

Mary Jane then talked to Peter at school the next day and told him about the situation at hand. She then, confessed loudly that she regretted breaking up with him, Gwen heard her and sympathized with her. Flash Thompson tried to make fun of all three of them but was screamed at in the process. Peter then went to stop the Hulk and they both simultaneously told him to be careful and stared at each other in the process.[citation needed]

Getting Back Together with Peter

"What's so special about Peter Parker? Everything."

When MJ and Peter were having lunch, Peter was called away by Captain America for his training. Later, when MJ learned that Osborn and the Six escaped from prison, she called Peter and informed him.[10] She kept trying to get a hold of Peter, to no avail, to see if he was alright, and when he didn't answer she got worried. She noticed a bolt of lightning down the street, near Peter's house, and immediately attempted to leave to investigate.[citation needed]

However her mother said she could not leave the house. She left anyway and when she saw Peter being beaten to death by Norman, she stole a van and drove it right into him. Peter got her out of the wrecked van and they kissed before he threw her to safety. Peter then crushed Norman with the van and it exploded, hurdling Peter several feet.[citation needed]

She ran over to him and attempted to call an ambulance, but it was too late. Peter died telling his Aunt that he was happy he was able to save her. MJ wept while holding his lifeless body.[11]

Mary Jane worked hard to find a way of revealing to the world that Nick Fury and S.H.I.E.L.D. were responsible for the death of Peter. After watching from his window May and Gwen leaving Queens with the help of Tony Stark, Nick Fury approached her, telling her that he felt responsible for Peter's death and that he loved him.[12]

When Gwen Stacy and Steve Rogers were arguing about Miles Morales being the new Spider-Man, Mary Jane stepped out of the shadows to point out that Captain America is just projecting Peter onto Miles.

After May Parker and Gwen Stacy found out there was a different Peter Parker in a different universe, Gwen called Mary Jane to explain it to her and told her to come over, when Mary Jane got there she saw Peter and Miles get in a limo with Nick Fury, Peter saw her and she ran off somewhere on her own and cried.[13]

Not knowing he was the superhero Nova, Mary Jane approached Rick Jones when he decided to give up on heroics and return to Queens after being in space for months. She told him about Peter's death and accidentally motivated Rick to return to his heroic duty.[14]

Mary Jane went to Peter Parker's Memorial with her new boyfriend, Liam. But due to awkwardness, she told Liam to stay behind. During the time, Peter Parker was revealed to be revived due to the OZ formula. At the memorial, she shared her thoughts of what Peter could be if he didn't die. After the party, she and the others gave leftover food to the homeless and went home.[15]

After Norman Osborn was again subdued, she watched as Peter passed on the Spider-Man identity to Miles and, saying he was going to leave and search for his identity. Mary Jane later met up with Peter and go over their plan to run away together, taking her mother's car.[16]

Currently none as a baseline human

Mary Jane is an exceptional student, gifted in the sciences. MJ has a knack as a detective.

Like this? Let us know!
Retrieved from "https://marvel.fandom.com/wiki/Mary_Jane_Watson_(Earth-1610)?oldid=6056828"
Community content is available under CC-BY-SA unless otherwise noted.