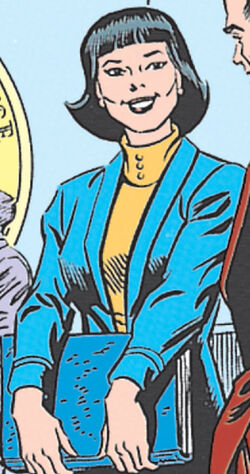 Mary Parker was the wife of Richard Parker, and like him, was a CIA agent. The two of them had a son, Peter, and a daughter, Teresa,[2] though the latter was born in secret.

At an unknown point, Richard and Mary found the parts of Master Matrix, an advanced Life-Model Decoy capable of controlling other LMDs, in a Hydra weapons depot on an uncharted island. They rebuilt him, but Mary believed that Matrix was alive and that S.H.I.E.L.D. should set him free.[3]

While Peter was still an infant and Teresa was a newborn, Richard and Mary were assigned to infiltrate the Algerian-based spy ring controlled by Communist agent the Red Skull, but the Skull discovered they were double agents and had them killed by his agent the Finisher in an airplane crash overseas and framed for treason.[4]

While Richard and Mary were on assignment, Richard's brother Ben and Ben's wife May took care of Peter. Ben and May had never had children of their own, but after Richard and Mary died, they became Peter’s surrogate parents and raised him as if he were their own son.

Like this? Let us know!
Retrieved from "https://marvel.fandom.com/wiki/Mary_Parker_(Earth-616)?oldid=6514709"
Community content is available under CC-BY-SA unless otherwise noted.