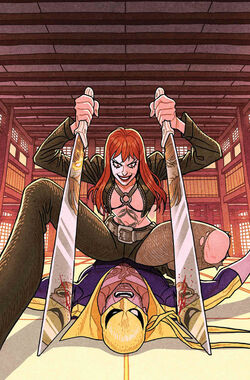 When I was little I had a pair of red rubber boots. My boots took me places. One day they got lost. I thought they were hiding under my bed. But they're gone. I miss them. All of them. One of us is tender one of us is not. One of us takes vengeance. All four tied in a knot.

Mary Walker's parents constantly argued with one another before she was born. After her birth, her father began molesting her in her crib. One night, when her father came into her room to molest her again, Mary retreated deeply into her mind and a new alter emerged to attack her father. After that her father never touched her again.[13] Mary's need to protect herself led to her second persona developing latent mutant powers of mind control, telepathy, and pyrokinesis.[14]

Mary eventually ended up in a mental institution, where her dissociative identity disorder was identified, but the source of her powers were not. As a child, Mary was sweet and cooperative, but was sickly and prone to epilepsy. She was also unaware of her second persona, which in contrast was violent and uncontrollable. Her second persona was dubbed "Typhoid," because she ran a constant fever. Typhoid eventually escaped the facility, bringing Mary with her. Mary started a career in acting and became a well know actress before disappearing. It was assumed Typhoid destroyed Mary's acting career.[6]

She eventually worked as a prostitute in a brothel, this is where she first met Matt Murdock, before he became Daredevil. He was there to attack a villain at the brothel where Mary worked. To his surprise, the girls working there defended him. In a moment of panic, he lashed out against the women, knocking Mary out the window. At that moment, Mary vowed that she would never allow a man to hurt her again. She became Typhoid Mary.[8][15]

Typhoid frequently worked for the Kingpin, and often battled Daredevil.[16] During this time she had a romantic relationship with Matt Murdock.

During the Acts of Vengeance, Doctor Doom sent her to defeat Power Pack.[17]

At one time, Daredevil manipulated Typhoid into bed and tricked her into reverting to her Mary persona right before he had her taken away in a straitjacket.[5]

At one point, during a particularly bad patch in her struggle for control over her alters, she befriended Mary Jane Watson and battled Spider-Man. As Bloody Mary once again resurfaced, she began killing men who were violent towards their domestic partners. With Spider-Man's help, she managed to regain control and voluntarily turned herself in to the police for treatment.[21]

At one point, Mary was confined to a mental institution where each alter hired a mercenary. Mary Walker hired Deadpool to kill her, Typhoid Mary hired Deadpool to break her out, and Bloody Mary hired The Vamp/Animus to break her out to resume a killing spree. Deadpool defeated the Vamp/Animus but refused to kill Mary Walker, allowing the Typhoid alter to become dominant.[22] Typhoid and Deadpool had a few adventures together. But when Deadpool pushed her out of a window, her memories of Daredevil kicking her out of the brothel window returned. She and Deadpool traveled to New York City to confront Daredevil, but Deadpool became upset when he found out that she had also been killing people from her past who couldn't defend themselves against her. He and Daredevil defeated her but, against Daredevil's pleas, Deadpool insisted on trying to rehabilitate her himself. However Mary discovered Deadpool's infatuation with Siryn and, using an Image Inducer, tricked Deadpool into sleeping with her. When Deadpool discovered the ruse, he was so shocked and betrayed that he gave up trying to help Mary.[23]

Through hypnosis, the abnormal and violent alters were suppressed from Walker's consciousness. She began to lead a normal life, becoming an actress on a soap opera. At some point, the Kingpin fell from power and was left in a coma. He eventually recovered, and started gaining power again and wanted to take out his enemies. He recruited Walker to distract Daredevil, using brute force to shock her out of her hypnotic treatments. She confronted Daredevil while he was in his civilian identity as Matt Murdock and set him on fire before his bodyguards Luke Cage and Jessica Jones took her down with Matt landing the final hit. She was then imprisoned on the Raft.[24]

Mary was able to escape during Electro's attack on the Raft, and began to work for the Kingpin once more.[25]

Mary was one of the few mutants to retain her powers following M-Day, but she was not initially included in the official record of the remaining mutants (the so-called "199th" still empowered mutant, or "Mutant Zero").[3]

After the events of the superhuman Civil War, Mary was found by Henry Peter Gyrich and recruited into the Initiative program. She joined because she could not control her dissociative identity disorder. She received a pardon and an opportunity to continue to attempt to integrate her fractured mind.[2]

Mary's true identity was made classified and she adopted the alias Mutant Zero. Dr. Leonard Samson prohibited anyone from referencing any of her other identities because it could have led to a period of instability. She was inducted into the black ops team, the Shadow Initiative, but was only allowed to be "activated" once per mission due to her mental instability.[3]

Later on, Taskmaster was appointed as field leader of the Shadow Initiative. He discovered Mutant Zero was Walker and analyzing her fight patterns he saw that they matched up. He shattered her helmet's faceplate and revealed her identity as Typhoid Mary. By remaining active in the field for too long, the psychological controls guiding the Mutant Zero alter failed, and Mary manifested a new independent alter which chose to abandon the Initiative.[26]

Later on Mary decided to work with Daredevil and The Hand to which she ended up fighting and burning Spider-Man. Later on when the heroes then broke into the revival of Bullseye she fought Spider-Man again and lost. In the end, it turns out that she was a sleeper agent for the Kingpin and was being controlled by him with subliminal messages.[27]

Mary later began working for Lady Deathstrike[28] and was her first recruit for her Sisterhood of Mutants.[29]

She was also seen working with Black Cat until she was captured. While in custody, she was kept sedated to suppress her abilities.[30]

Mary also had dissociative identity disorder, causing her to have two other abnormal alters in addition to her main, seemingly normal one. "Mary" was a demure, quiet pacifist; "Typhoid" was audacious, lustful, and vicious; and "Bloody Mary" was merciless, brutal, and hated all men. Mary occasionally manifested a fourth alter, "Walker", who acted as a moderating influence on the others.[31]

Typhoid Mary is a mutant[27] and possesses a number of powers. The effectiveness of her powers differs on which alter is in control. "Innocent Mary" and "Walker" typically has no access to her powers. Typhoid, Bloody, and Mutant Zero all access her telepathy, telekinesis, and pyrokinesis to varying degrees. Although Mary cannot access her powers, Typhoid has occasionally expressed their powers through Mary while Mary was in control, and without Mary realizing it.[6]

Mary seems to be very skilled in martial arts and the use of edged weapons.[6]

Dissociative Identity Disorder: Mary Walker traditionally had at least two distinct alters. The "Mary" alter is a timid, quiet, pacifist while her "Typhoid Mary" persona is adventurous, lustful, and violent.[6] In later years she would manifest other identities -- her "Bloody Mary" alter is sadistic, brutal, and misandrist, and her "Walker" alter is focused, detached, and stable.[20] Finally, she demonstrated a fifth alter as "Mutant Zero", a no-nonsense, efficient, military-type.[33]

As Mutant Zero, Mary is equipped with a suit of full body armor that appears to enhance her physical strength and an arsenal of weapons, including guns and various blades.[3]

Like this? Let us know!
Retrieved from "https://marvel.fandom.com/wiki/Mary_Walker_(Earth-616)?oldid=6494701"
Community content is available under CC-BY-SA unless otherwise noted.