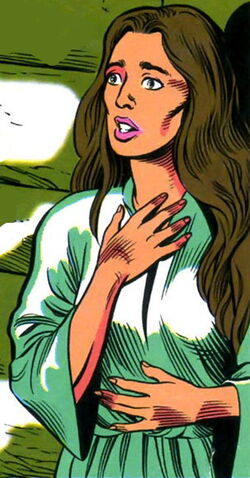 Mary of Nazareth and Joseph had just become engaged when she miraculously became impregnated by God, as foretold to her by an Angel. The angel later returned and explained to Joseph that the child within Mary was God's, that his name would be Jesus, and that he was the Messiah. At that time, Caesar decreed that a census be taken, and every person in the entire Roman Empire had to go to his own town to register. Joseph, being of the line of David, was required to go to Bethlehem to register with Mary. While in Bethlehem, Mary gave birth to Jesus. Probably due to the census, the inn was too crowded, and Mary gave birth in a crude stable. She wrapped the baby in cloths and placed him in a manger.[4]

Like this? Let us know!
Retrieved from "https://marvel.fandom.com/wiki/Mary_of_Nazareth_(Earth-616)?oldid=5062291"
Community content is available under CC-BY-SA unless otherwise noted.