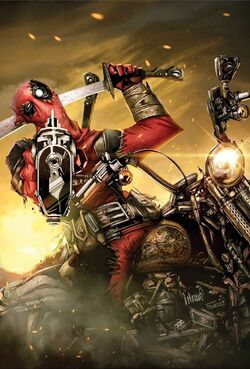 The man who would become Masacre used to be a priest. He initially thought that dedicating his life to religion would help him feel fulfilled. One day, the mercenary Deadpool visited his church and confessed to him, leaving an important impression on him. The priest concluded that there was no good in the world, and declared that it instead deserved punishment.[1]

Taking the name of Masacre, and inspired by Deadpool, he swore that once he "fixed" Mexico, he would travel to the United States in order to join forces with his idol.

With the reluctant help of Inspector Jaime Gordón, Masacre was on the hunt for crimelord Calavera de Jade. After stopping a gang named Los Muertos from robbing a bodega, Masacre met up with Gordón. Gordón refused to give him a notebook with the names and info on every criminal of the city, for which Masacre attacked him and took the data by force.

At night, Masacre rode in his bike to Calavera de Jade's expensive mansion and crashed a party he was holding with different other criminals. The party was in celebration of the arrival of El Especialista, a henchman brought from the United States by the CIA in order to take care of Masacre. Soon after Masacre attacked the attendees, Calavera de Jade deployed El Especialista. This henchman could allegedly not be hurt by any bullets, so Masacre stabbed him with his two machetes and then cut off his arms.

After killing El Especialista, Masacre kicked Calavera de Jade out of the balcony, and the villain fell to his death. The CIA agent confronted him, and Masacre managed to use one of Calavera's jaguar pets to subdue him. Shortly before being killed by Masacre, the CIA agent promised he would be avenged.

The following day, Masacre bid farewell to Jaime Gordón, and rode in his bike to the United States, alongside the jaguar pet, whom he had named Justicia.[2] When he reached New York City, Masacre became a member of Deadpool's mercenary group known as Mercs for Money.[3]

However, Masacre and the rest of the Mercs for Money eventually became disgruntled by Deadpool, from the way he treated them to the delays in their paychecks.[4] When they set out to create their own business, the Mercs discovered Deadpool had been skimming on them.[5] After retrieving and burning their contracts from a safe deposit in Ho-Ho-Kus, New Jersey, the Mercs and Deadpool parted ways.[6]

A makeshift version of Deadpool's Suit.[2]

A pair of machetes and a shotgun.

Like this? Let us know!
Retrieved from "https://marvel.fandom.com/wiki/Masacre_(Earth-616)?oldid=6473823"
Community content is available under CC-BY-SA unless otherwise noted.