Spitfire and the Troubleshooters #1
(October, 1986)

The Massachusetts Institute of Technology (M.I.T.) is a private, coeducational, research university located in Cambridge, Massachusetts in the United States of America. M.I.T. has five schools and one college, containing a total of 32 academic departments, with a strong emphasis on scientific and technological research. M.I.T. is one of two private land-grant universities and is also a sea-grant and space-grant university.

M.I.T. alumni include Otto Octavius (who graduated at the top of his class),[1] Tony Stark (who joined an undergraduate program at the age of fifteen and majored in physics and electrical engineering),[2] Sunset Bain (who seduced Stark into revealing the security codes for Stark Industries),[3] Morley Erwin (who gained masters in electrical engineering),[4] Erik Killmonger (PhD in Engineering and Master of Business Administration),[5] Jeanne Foucault (who graduated at age of fourteen)[6] 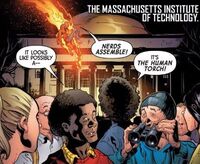 When the Avengers Unity Division faced off against a villain calling himself "The Shredded Man" in the streets of Boston, Massachusetts, Johnny Storm hightailed it over to M.I.T. to find people to help curtail the plant creatures the Shredded Man was spawning. However, they only had questions about Reed Richards' work.[7]

Shortly after that, a 15-year-old student Riri Williams caused a commotion when she stole campus equipment to build her own prototype Iron Man Armor based on a reverse-engineered version of Tony Stark's own designs. When campus security caught notice of her suspicious activities, Riri was prompted to don the suit of armor and fly away.[8]

The five teenagers who composed the Troubleshooters were brilliant students at the M.I.T., being tutored by Professor Jennifer Swensen.[9]

Several decades later, he gave a presentation, showing his latest technology regarding holographic therapy and announcing the creation of a fund, the September Foundation Grant, to provide for every project at M.I.T. Following the event, Stark was confronted in the halls of the institute by Miriam Sharpe, a mother whose son had died in Sokovia during a battle between Stark's Avengers and the supervillain Ultron.[11]

Peter Parker applied to M.I.T. to get a fresh start in life following accusations of murdering Mysterio, but M.I.T. rejected his college application, as well as those of Ned and MJ due to their association with Spider-Man. In an attempt to get them admitted to M.I.T., Parker approached Doctor Strange to let the world forget he was Spider-Man, but accidentally fractured the multiverse. Parker, however, was able to convince an M.I.T. admissions officer to let MJ and Ned to M.I.T. after saving her from Doctor Octopus. After Strange erased all memory of Peter Parker from the universe, Ned and MJ were accepted to M.I.T.[12]