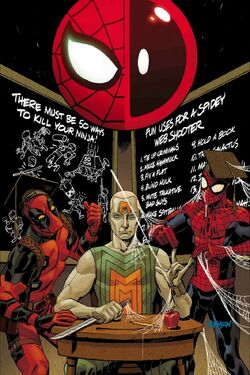 The Master Matrix was an advanced Life-Model Decoy found in a Hydra weapons depot on an uncharted island.[1] He was reassembled in a Secure Underground S.H.I.E.L.D. Bunker by Richard and Mary Parker, and although he was originally designed as a weapon that could control other Life-Model Decoys, Mary believed that he was alive and as such that S.H.I.E.L.D. should set him free.[3]

The android was kept in stasis for years until the Chameleon activated various LMDs of superheroes from Project Doppelganger for them to commit crime on his behalf, allowing the Master Matrix to connect to the LMDs. The LMDs were successful in waking Matrix, after subduing the Chameleon, Spider-Man, a future Deadpool, and their teammates. After battling the superheroes again, Matrix stated that he would wipe out humanity and replace them with LMDs before vanishing with the other LMDs. When Spider-Man and his future self tried to relocate him, they found him at their parents' graves.

Matrix had decided to not kill humanity and instead seek forgiveness as the Parkers had taught him, by aiding the heroes against the Chameleon, who arrived in a Galactus LMD, which was created as a countermeasure for Matrix by Nick Fury. They were then joined by Deadpool and his future self in the battle and Matrix sacrificed himself in order to protect Deadpool. As the battle went on, the LMDs came and fixed their Master, then at his request they fused together in order to stop the Chameleon; howver, even their combined efforts were not enough. After Deadpool, Inc. defeated the Chameleon by crushing the Galactus LMD with the S.H.I.E.L.D. Helicarrier U.S.S. Deadpool, Spider-Man and Deadpool decided to teach Master Matrix to be a better man.[4]

As Spider-Man and Deadpool tried to help Matrix become a hero, unbeknownst to Wade Mockingbird, who did not trust the Master Matrix, had given Pete a Kill Switch in case Matrix went rogue. As Matrix tried to help his "dads" in fighting the Wrecking Crew, they were transported to the Savage Land via an Asgardian Portal Generator used by the Wrecking Crew. After Matrix destroyed the Kill Switch that Spider-Man gave him as a sign of trust, Matrix created an artificial portal based on the Asgardian technology and helped Spider-Man, Deadpool, and the Warriors Three in defeating the Wrecking Crew. Realizing the threat that he posed, Matrix undid the troubles caused by Deadpool and willingly locked himself in Area 14 beneath Rolling Hills, New York. He also created a second Kill Switch and gave it to Bobbi in case of him becoming a threat. He assured his dads that he was going to be fine there and convinced them to take a road trip together in order to grow their bond.[5]

As Spider-Man and Deadpool were enjoying their trip, Matrix seemed to make the best of his situation, as he was seen throwing a party with the children guardian robots in Area 14.[6] He later accompanied Spider-Man and Deapool in putting the Manipulator in jail.[7]

Master Matrix was then hired by "Cage McKnight" as the director of photography, along with Screwball and H.E.R.B.I.E., in his upcoming movie.[8] During production he formed a friendship with Peter's girlfriend, Mary Jane Watson,[9] and after finishing the movie he was among the crew members who battled and defeated the Savage Six.[10]

LMD Hive Mind: Master Matrix is connected to the other Life-Model Decoys.[3]

LMD Manipulation: Master Matrix is able to change the appearance of the LMDs based upon targeted DNA assimilation,[3] and can fuse with them.[2]

Like this? Let us know!
Retrieved from "https://marvel.fandom.com/wiki/Master_Matrix_(Earth-616)?oldid=6432489"
Community content is available under CC-BY-SA unless otherwise noted.