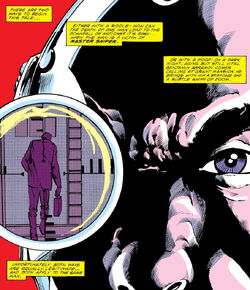 Nimrod Strange's best of the Slayers Elite, he followed a man named Benjamin Abramov to Marc Spector's home and shot him. He was later tracked down by Moon Knight, and in his fight with the vigilante, he started an avalanche that Moon Knight let him be taken by.[1]

Described as a "ghost" he was talented in stealth tactics and as his name says a masterful sharpshooter.

His primary weapon of choice was a forearm mounted pistol that had normal rounds and explosive.

Like this? Let us know!
Retrieved from "https://marvel.fandom.com/wiki/Master_Sniper_(Earth-616)?oldid=5077991"
Community content is available under CC-BY-SA unless otherwise noted.