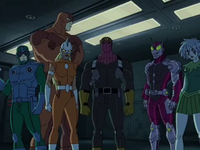 The Masters of Evil were formed by Goliath, and Screaming Mimi and the Beetle The team however was easily defeated by the Avengers.[2]

Baron Zemo disguised the team as the Thunderbolts taking one new identities becoming Citizen V, MACH-IV, Songbird, Atlas, Meteorite and Techno. They have been the debut superhero team that has been doing some heroics where they had a woman named Gabby as their publicist. The Thunderbolts are first seen when they help the Avengers take down Growing Man. The press ends up giving the Thunderbolts the credit. Iron Man later tracked them to their headquarters and had a brief altercation with them until a bomb sent by Justin Hammer nearly wiped them out. When it comes to three possible bunkers of Justin Hammer, each members of both teams went to them and fought each Mandroid. It was through one of them that Iron Man and Citizen V found that the Thunderbolts' publicist Gabby has connections with Justin Hammer. At the latest bunker, the Avengers and the Thunderbolts fought Justin Hammer in his Mega-Mandroid which had force field abilities. Thanks to Moonstone phasing through, the Mega-Mandroid was defeated with Justin Hammer being handed over to the authorities. Citizen V took the opportunity to fire Gabby as Iron Man is believed to think that the Thunderbolts are good guys after all. [1]

Ulysses Klaue was in the middle of a Vibranium heist until he ends up fighting the Avengers and the Thunderbolts. While fleeing from them, Klaw runs into Citizen V who was the one who secretly hired him to steal the Vibranium. Upon being defeated, Citizen V places a device on Klaw's unconscious body and some on the Vibranium containers. Later on, the device goes off which merges Klaw with the Vibranium turning him into a Vibranium version of himself. It took the Avengers and the Thunderbolts to defeat him. Suspicious of the Thunderbolts, Hawkeye finds out that they were the Masters of Evil and gets detected. Luckily for him, the Avengers showed up resulting a fight between the two groups. After being saved from death by Hawkeye during the robbery, and seeing what it's like be a hero, Songbird convinces the rest of the team to turn on Zemo. Together, the Avengers and Thunderbolts expose Zemo as Citizen V which leads to Zemo combining with the energies of Klaw to become an energy monster. Thanks to a strategy from Captain America and Songbird, the Thunderbolts were able to defeat the energy monster. While also stating that they might not have seen the last of Baron Zemo, Captain America advises to the other Thunderbolts members that they should turn themselves in and that they will become official heroes when they get out.[1]

Retrieved from "https://marvel.fandom.com/wiki/Masters_of_Evil_(Earth-12041)?oldid=5548643"
Community content is available under CC-BY-SA unless otherwise noted.