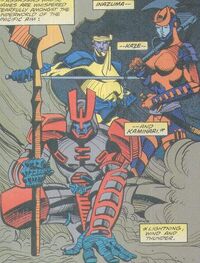 Base of Operations
Tokyo
Affiliations

Team Leader(s)
the eldest member is given rank of Sensei

Origin
The Shinma demon Kao-Goto Suru, also known as the Face Thief, killed and replaced the warlord Tezuka. He then led Tezuka's armies in rebellion against the emperor. Only three warriors survived the disastrous campaign. After discovering the truth, they swore vengeance on the demon. They asked the gods for assistance and were empowered by the Three Storms: Kaze (Wind), Inazuma (Lightning), and Kaminari (Thunder).

The Masters of Silence uphold a strict code of bushido. When called upon, they extract vengeance for their employer. While this usually means death, other compensation may be offered and agreed to. Each master is bound to their warrior soul until death; a new host must then be found.

The Masters are able to conceal their presence. Highly advanced sensors may be able to detect them, but normal devices may only be able to catch a glimpse of their shadow at best. However, as a matter of honor, they will reveal themselves to their bounty.

The current group fully embraces technology and the modern world. They were tricked by Justin Hammer into attacking Iron Man, but then joined Iron Man in demolishing Hammer's facilities. [1][2]

Iron Man again encountered the Masters as they searched for the Face Thief. Kaze was killed, but Meredith McCall was chosen by the warrior's soul to replace him, as the Face Thief had murdered both her husband and father.[3]

While investigating The Golden Triad's abduction and ritual sacrificing of children, the Masters met Ghost Rider. Initially confusing him for a monster summoned by the Triad, they joined forces due to their shared interest of vengeance. Although they were unable to stop Tsin Hark's ritual, they managed to keep his army at bay long enough for Ghost Rider to defeat him.[4]

Retrieved from "https://marvel.fandom.com/wiki/Masters_of_Silence_(Earth-616)?oldid=4034618"
Community content is available under CC-BY-SA unless otherwise noted.