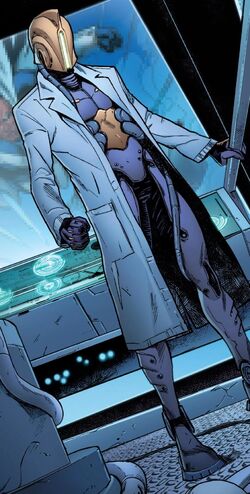 Max Brashear was the second son of Adam Brashear, the Blue Marvel. After his brother was left stranded in the Neutral Zone following a battle against Dr. Skorpion, Max grew distant from his father, ultimately abandoning his family and asking not to be contacted ever again.[2]

Max started working for the terrorist organization W.E.S.P.E., under the identity of Doctor Positron, in order to fund his projects to open a portal to the Neutral Zone and bring his brother back.

A short time later, Max lured Blue Marvel and the Mighty Avengers to his base on an island where he revealed his identity to his father and activated the portal to the Neutral Zone, but the dimensional feedback caused most of his headquarters to explode, revealing a giant hand emerging from the portal.[3]

Kevin started emerging from the portal hideously enlarged and distorted as Max attempted but failed to estabilize the portal. Blue Marvel realized the only way to save him was to push him back, for which She-Hulk attacked Kevin until he went inside the portal once more so it could be deactivated without any risk. Adam attempted to reason with Max, but he angrily insulted him and escaped.[2]

Weeks later, Max approached his father more calmly, after having gotten rough coordinates of Kevin's location within the Neutral Zone. Kevin communicated with him, warning him about the Beyond Corporation.[4] When the Mighty Avengers confronted one of their avatars, Adam and Max worked together to reprogram the portal the Beyond Corporation used to enter reality and successfully bring back Kevin, who had been empowered by his exposure to the Neutral Zone. Kevin forced Beyond's agent back to the Neutral Zone, while disappearing as well in the process. Blue Marvel and Max soon set out to try to reach out to Kevin again.[5]

Max later joined the rebranded A.I.M., working for their Theoretical Physics Division.[6] During his tenure working for A.I.M., Max befriended Víctor Álvarez, aka Power Man, a member of A.I.M.'s New Avengers team. When Víctor decided to leave A.I.M. and return to his home neighborhood, Max decided to follow him, having grown bored of his adventures with A.I.M. He also suggested to use a new code name: Iron Fist.[1]

Like this? Let us know!
Retrieved from "https://marvel.fandom.com/wiki/Max_Brashear_(Earth-616)?oldid=5798238"
Community content is available under CC-BY-SA unless otherwise noted.