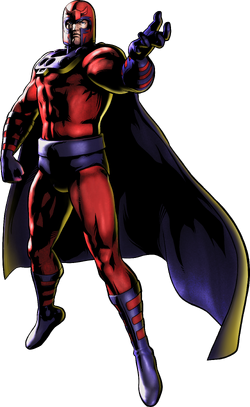 This Magneto very similar to his Earth-616 counterpart.

X-Men: Children of the Atom: Magneto is the primary antagonist, serving as the final boss of the game. He wants to create a world where Humans would no longer exist and Mutants are the ones to reign supreme and dominate on Earth. However, the X-Men foiled those plans. If any of the heroes defeat Magneto, he will offer them a position to join the brotherhood, but the heroes refuse the offer, following Charles Xavier's peaceful ideals instead.

Marvel Super Heroes: Though Magneto plays a smaller role in this game, his ending shows that after acquiring the Infinity Gems, he is able to create worlds for Mutants to thrive peacefully.

X-Men Vs. Street Fighter: Magneto is one of the bosses, alongside with M.Bison, shown before approaching Apocalypse. He, along with Bison might be working under Apocalypse, but it might be more of a "pretend" than official. In Magneto's ending, he is shown defeating M.Bison and taking control of Shadaloo and betrayed by his former cohorts Balrog, Vega, and Sagat. Rather than Shadaloo becoming a base for M.Bison's reign of selfish power, Magneto uses it as a base for his Brotherhood of Mutants, classifying Balrog, Vega, and Sagat as not only mutants due to their special abilities in combat but also part of the new Acolytes.

Marvel Vs. Capcom: Though the story loosely bases on the Onslaught era (the entity created by Charles Xavier and Magneto combined), Magneto labeled as an assist in the game may or may not be considered as canon. It is unknown if this form of Onslaught contains the consciousness of Magneto like the comics or a different entity as a whole.

Marvel Vs. Capcom 2: Though there technically is no in-depth story, one image shows Magneto and Akuma together.

Marvel Vs. Capcom 3: Though Magneto's involvement in the story is mostly unknown at this time, the third trailer shows him stealing a virus sample from Albert Wesker, possibly planning to use it to turn humanity into mutant beasts or killing the human populace, similar to his plans in the X-Men comics and movies, or perhaps to keep them from infecting the mutant populace in the process, however in the Extended Intro he's shown to be on Doctor Doom's side althought he may be "pretending" to be on his side and plotting his own plans. After defeating Galactus, Galactus offered a "gift" to recreate the utopia world, Taa II, Galactus's Homeworld before devour. This new Taa II is where all Mutants living on Earth can now freely leave Earth and prosper peacefully without any more discrimination.

Magneto's helmet is built to shield his mind from psychic probes and manipulation. The costume that Magneto wears is actually a type of armor that he has created through the use of his magnetic powers. The costume is actually an amalgam of various lightweight, but highly durable, metallic alloys that further protects him from many forms of physical injury.

Magneto relies primarily on his natural powers, although he has occasionally used magnetically-powered devices he invented, such as his machine for inducing earthquakes and volcanic eruptions from afar. Magneto used to employ mechanisms for magnifying his own powers, but, since his rejuvenation, he no longer needs them.

In the past, Magneto has used a number of exotic aerial vehicles of his own design. He is also fully capable of flying under his own power, which he tends to do most of the time.

Like this? Let us know!
Retrieved from "https://marvel.fandom.com/wiki/Max_Eisenhardt_(Earth-30847)?oldid=6058603"
Community content is available under CC-BY-SA unless otherwise noted.