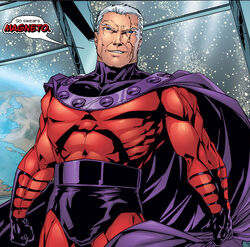 Magneto was arrogant and insane. Even after Hyperion and Weapon X made the world safe for mutants again, he insisted upon destroying the planet anyway. He had Forge hurl an Asteroid at the Earth, and refused to stop it when Hyperion demanded so. Hyperion eventually became irritated by his petulance, and blew a hole through Magneto's head while in orbit over North America.[citation needed]

Seemingly those of Max Eisenhardt (Earth-616).

He was allegedly able to use his magnetokinesis to boil people's blood by acting on the iron in it.[1]

Seemingly those of Max Eisenhardt (Earth-616).

Arrogance, psychosis, and delusions of grandeur

Like this? Let us know!
Retrieved from "https://marvel.fandom.com/wiki/Max_Eisenhardt_(Earth-94831)?oldid=5832016"
Community content is available under CC-BY-SA unless otherwise noted.