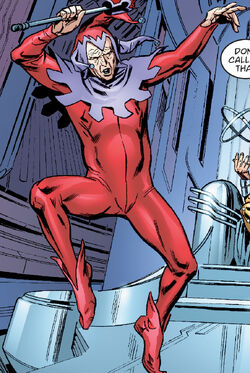 The past history of Magneto on Earth-9997 presumably matches that of his Earth-616 counterpart. To date, the findings and research of Magneto's past initiated by X-51, or Kyle Richmond have shown that most of Magneto's history is on par with most of his other alternate reality counterparts. One item of interest would be that Magneto has often prevented Toad from committing suicide on a number of occasions during their past exploits.


In recent times, after the Terrigen Mists were released into Earth's atmosphere, the governments of the world reactivated the Sentinels to round up all those who were mutating and putting them in quarantine camps, because at the time nobody knew the cause of the sudden surge of mutations. With each new mutated human, Magneto felt that he had gained a new mutant brother and was outraged at their treatment by those still unaffected. Attacking the Sentinel's he tricked them into following him into the Savage Land, because in his last visit there he learned that the air was thick with iron and that he could magnetically control the wind to destroy the robots which were otherwise immune to his mutant powers.


Magneto then used the Sentinels to construct Sentinel City, a safe haven for mutants in the Savage Land, and he would welcome his former lackey, the Toad to come and sit by his side as a honored citizen. The Toad, after years of being abused by Magneto begrudgingly accepted and silently cursed his former master for being praised as a hero.


When Galactus destroyed the Celestial Embryo growing in the Earth's core, it caused a loss and redistribution of Vibranium in the Earth's core, which causes the poles on Earth to shift of the course of the next three years. During the time, a Human Torch was setup in the Savage Land to burn the Terrigen Mists out of the atmosphere in an attempt to restore humanity to normal. Also during this time, due to unexplained reasons, the shift in polarity also caused Magneto and Toad to switch abilities. Now Toad had become the master of magnetism, and Magneto had become the bumbling lackey. Toad then used his newfound magnetic powers to make Magneto his slave.


Sometime later, Captain America, the reborn Mar-Vell, Ka-Zar, and Shanna the She Devil came to Sentinel City to be allowed passage to the doorway to Limbo. There Captain America was outraged by the Toad's treatment of Magneto, however could not do anything least he not get the Toad's cooperation.


Later still, the Human Torch in the Savage Land would shut down, but due to neglect over anything else, Black Bolt is sent there to figure out the cause. There Bolt, Iron Maiden and Jade Dragon (the latter two were summoned to the Savage Land by Cable whose Techno-organic Virus infected body was trapped beneath the city) got caught up in the power struggle between Magneto and Toad. The Black Bolt, fighting for Magneto's freedom was forced to fight his own Iron Men as well as being constructed by Toad called Tank. During the battle, Iron Maiden (with the guidance of Cable) manages to rearrange the Vibranium beneath the Savage Land to reverse the power switch and soon Toad finds himself back to normal.
No longer wanting to live as he once did, the Toad once again tries to commit suicide by cutting his throat, however Magneto stops him and saves his life. Magneto then resumed control over Sentinel City.
Magneto would later be seen joining the fight against the Absorbing Man when he managed to absorb the entire island of Manhattan. He would use his magnet powers and an army of Sentinel's under his command, but to no avail. Magneto was last seen attending the wedding of Medusa and Captain Britain, his current whereabouts are unknown, but it's presumable that he continues to live in Sentinel City.[citation needed]

Magneto has the same mutant abilities to control magnetic force as his Earth-616 counterpart, although he is 30 years older it appears that his powers are stronger than ever as he was able to restore Sentinel City, and an army of destroyed Iron Men with the wave of his hand. If this is due to his exposure to the Terrigen Mists, or due to natural causes remains to be explained.
Also, for a time, he had the powers of Toad, although the exact extent of that adoption of power is unknown as Magneto did not display any of the Toad's abilities while in this state.

Like this? Let us know!
Retrieved from "https://marvel.fandom.com/wiki/Max_Eisenhardt_(Earth-9997)?oldid=6488383"
Community content is available under CC-BY-SA unless otherwise noted.