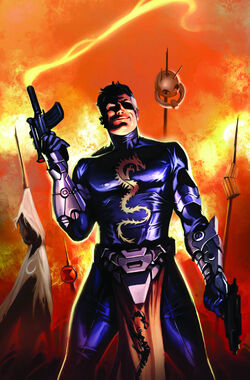 No! Your nullification was my dream! Nothing more! I don't want the end of life -- only the absence of feeling it!

Scorpio stole an advanced S.H.I.E.L.D. Life-Model Decoy of Nick Fury and used the Zodiac Key to reprogram it. Instantly, the LMD gained all of the real S.H.I.E.L.D. Executive Director's memories and actually thought it was the real thing.[1]

Max served Scorpio in his mad scheme to create an android version of the Zodiac. He kidnapped Jack Norriss and helped Scorpio fight against the Defenders. When Scorpio realized that he was defeated he commanded Max to give him a gun and shot himself.[2] It was later revealed that this Scorpio was, in fact, himself an LMD.[3]

Later, after the LMD Zodiac was again taken down before their plan to use the LMD to free a prisoner from the Avengers came to fruition, S.H.I.E.L.D. determined the LMD to be an anomaly as the Zodiac Key altered it so much that it began thinking for itself, and had it held up on the Helicarrier for study. But the LMD repeatedly escaped S.H.I.E.L.D. custody and was constantly hunted and forgetting that it wasn't the real thing. In the meantime, the LMD took down Hydra, A.I.M., and U.L.T.I.M.A.T.U.M. plots.[1]

When S.H.I.E.L.D. finally caught him, the LMD came face-to-face with the real Fury, who determined that he has to be destroyed, for the LMD having all his memories made him too dangerous. But John Steele helped the LMD escape by replacing him with another. He convinced the LMD, who he dubbed Max, to join the enigmatic Shadow Council.[1]

Believing that the Shadow Council was building a weak army for the Abyss,[4] Max Fury took over the organization and used their wealth to fund Bagalia, an anarchistic red light nation where he gathered together a new incarnation of the Masters of Evil[5] to serve the Abyss.[4] John Steele, who was working undercover for the Secret Avengers since they freed him from the Shadow Council's control, attempted to escape from Bagalia with the Thorned Crown (one of the three crowns the Martians created to channel the power of the Abyss' Dark Children) but was caught by the new Masters of Evil and subsequently murdered. Consequently, the Secret Avengers went to Bagalia to try and stop Taskmaster from delivering the Crown of Wolves to Max Fury as he was hired to do.[5] Taskmaster managed to deliver the package, however, and was paid with shots to the chest.[4]

Once in possession of all three crowns, Max Fury merged them together and donned the merged crown to become the Abyss' vessel, but that didn't work as he was an LMD. The merged crown was then donned by a wounded Taskmaster, who proceeded to take control of the minds of both the Masters of Evil and the Secret Avengers.[4] The Secret Avengers Agent Venom and Ant-Man, who weren't affected by the Abyss' influence due to one being a symbiote host and the other secretly an LMD replacement, fought against the Abyss as he tried to spread his influence beyond Bagalia and managed to sever his connection to Earth by bonding the Venom symbiote to Taskmaster and unmerging the three crowns.[6] The crowns were then confiscated by the Secret Avengers[7] while Max Fury was incarcerated at the Lighthouse.[8]

Some time before putting his hands on the Crown of Wolves, Max Fury allied himself with the Descendants, a collection of mechanical lifeforms created by the man only known as Father by using the Orb of Necromancy.[9][10] Fury planned to use the Abyss to help the Descendants get rid of humanity,[8] but got too carried away by the prospect of not feeling life that the entity offered,[11] enough to earn the distrust of Father.[8] Once Fury had been imprisoned by the Secret Avengers, Father ordered the Ant-Man LMD (now calling himself the Black Ant) to enter his cell and make him sign some papers handing Bagalia over to him. After he signed it, Black Ant killed him.[8]

Like this? Let us know!
Retrieved from "https://marvel.fandom.com/wiki/Max_Fury_(Earth-616)?oldid=6073544"
Community content is available under CC-BY-SA unless otherwise noted.