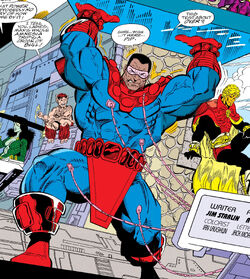 Maxam was a time traveler from a future when Adam Warlock's evil self, the Magus, had conquered the universe. Maxam and his childhood friend Zhang were cared for by a Badoon named Master Ecclaw. Maxam was chosen to be the sent back into the past to destroy the Magus' "larval stage" of Adam Warlock.[1] However, Maxam lost his memories as soon as he arrived in the past.[citation needed] He was found amnesiac on the shore of Monster Isle, where the Infinity Watch resided.[2]

Maxam joined the Infinity Watch soon afterwards, but did not have an Infinity Gem as the other members did. Moondragon, even with the Mind Gem at her disposal, was incapable of reading Maxam's thoughts, which caused Gamora, who had previously seen Maxam killing Adam Warlock in a vision given to her by the Time Gem,[3] to harbor misgivings about him.[4]

Maxam proved himself to be a trustworthy member of the group and helped the team in many battles against foes such as Count Abyss,[5] Thor (after he was struck by the Warrior Madness);[6] and during the Infinity Crusade.[7]

After Moondragon was critically injured, the Infinity Watch met to decide the fate of the Mind Gem. Maxam offered to take the gem but Gamora was adamant about him not being entrusted with the gem. After making a comment about Gamora's love for Adam Warlock, Maxam was attacked by Gamora, who tried to kill him. Gamora begged Adam Warlock to have faith in her and that Maxam was not to be trusted, but Adam refused to see her side of things, prompting Gamora to quit the Infinity Watch. Later that night, Maxam placed the Time Gem, which Gamora had thrown at Adam Warlock earlier, upon his brow and regained his lost memories.[8]

Maxam ambushed Adam and they fought.[1] Maxam was finally defeated by Moondragon using her mental powers to give Maxam the hallucination that he had slain Adam Warlock in battle. With his mission seemingly completed, Maxam teleported back to his own timeline never to be seen again.[9]

Maxam had the ability to grow in size and strength, the limits in which he was strong enough to lift over 100 tons and durable enough to be classified as virtually indestructible. He was also invulnerable to psychic assault.

Maxam is normally a fair warrior. However, he can be pushed into a savage, frenzied state in which he is virtually unstoppable. He is also familiar with sophisticated technology.

Upon reaching maximum size, he could lift over 100 tons.

He wore rocket units on his boots to fly.

Owner of the Time Gem for a brief period of time, which unlocked his memories.

Like this? Let us know!
Retrieved from "https://marvel.fandom.com/wiki/Maxam_(Earth-93112)?oldid=5859321"
Community content is available under CC-BY-SA unless otherwise noted.