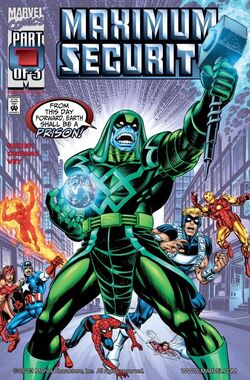 At the Intergalactic Council, the Skrull ambassador Kreddik brought up a complaint regarding humans which Majestrix Lilandra was forced to let the Council address. He reported that Professor Xavier and Cadre K had been interfering in the purging of Skrull mutants. Who were establishing hidden colonies of K-class Skrull mutants. He reminded the council of how the humans had interfered in the affairs of other races, defied the Celestials, and harbored the Dark Phoenix. How they forced their will on others, respecting no boundaries or governments. Despite the attempts of Lilandra to direct the attention of the Council to other matters, the ambassador demands that the issue be heard and judged, and invoked M'ndavian Justice.

During the meeting it was also revealed that Ego the Living Planet had gone insane, destroying worlds in search of other sentient worlds, ones like Ego. Attempting to awaken these worlds, some barren and others populated, all were destroyed when they did not "awaken". It kept doing this for weeks, despite the assurance of Lilandra that the Council had the resources to protect the member worlds and stop Ego. The Council sent a fleet to intercept Ego and attacked the living planet which destroyed the fleet, it's crew saved by the Silver Surfer. Ego then attacked the world on which the Intergalactic Council was based. Professor X and Cadre K saved the Council, with the assistance of the Silver Surfer, attacking Ego's mind. A new trading race that had recently appeared, the Ruul, who had been sharing technology with other races, miniaturized and imprisoned Ego. The Council out of anger, fear, and shame voted against Earth.[1]

On Earth, the governments and heroes began encountering a variety of aliens which they were forced to fight and apprehend. Interrogation of the aliens revealed that they were being dumped on Earth which had been turned into a prison world. The Avengers headed out to space and upon approaching the main ship, the vessel was destroyed though the Avengers escaped it in time. Whom were then beamed on board the main ship and discovered Ronan the Accuser on board. From him they learned that the Council had determined that Earth was a threat to the intergalactic community. Mankind had been intruding in intergalactic affairs for years. Standing against the galactic powers, from interstellar empires to cosmic beings. Meddling in the affairs of others and interfering with their cultures. The Council determined that action needed to be taken and Earth's Solar System would be quarantined. A million watchtowers were built at the fringes of the Solar System, which walled off the with an impervious barrier of energy.

To occupy the Earth's heroes so that they didn't focus their resources in trying to break free, they dumped the unwanted, the lawless, and the untamable from across the galaxies on Earth. Whom were brought to the Solar System, processed, and then teleported to Earth individually or in small groups. All of whom were sentenced to life on Earth. The council expected that it would result in global unrest, chaos, and damage which would end in one of three scenarios; the destruction of the criminals, the destruction of mankind, or years of war between the alien criminals and mankind. Ronan was made warden of this prison world. Ego which had been compressed to the size of a human baby was sent planetside. Soon it had engulfed a whole town and estimates were that within a week it would absorb the entire planet.[2]

While the world's super heroes were fighting the alien criminals on Earth, at the Intergalactic Council's home planet, Cadre K with Xavier & Bishop attempted to reach Lilandra to convince her to change course, defeating the Shi'ar commandos. The Council were protected by the Council Guard who stopped them with Psion-Cannons which within a few seconds knocked them all out. Earth government representatives tried to convince groups of aliens who had clustered together to join forces with the humans, to fight those who imprisoned them on Earth. Without success since the ones who clustered weren't aggressive criminals. In the meantime the Fantastic Four, Silver Surfer, Iron Man, and SHIELD agents desperately tried to stop Ego's expansion.

US Agent found Ruul constructing a structure on Earth and having vehicles and construction equipment., which meant that they were not among the alien criminals dumped on Earth. The Ruul had groups across Earth, working on various projects. He saw one of them use an Omni-Wave Projector for communications, and came to the conclusion that the Ruul were actually Kree. Meanwhile on the moon a strike force of Ruul broke into a SHIELD base where the Supreme Intelligence was being kept confined, slaughtering its security.[3] The Ruul freed the Supreme Intelligence from the SHIELD base, revealing themselves as working for the Supreme Intelligence.[4] Back at the Intergalactic Council, the Cadre K had been imprisoned for interrupting the council meeting.[5]

A team of Avengers who were out in space away from the Solar System arrived and requested an audience with Lilandra, who explained why Earth was under quarantine. While they waited for their appeal to be heard they were ambushed by Ruul and taken captive. They were then taken to Hala where they discover the Ruul were actually the Kree. The Supreme Intelligence explained how the Ruul came to be, in which the detonation of the Nega-Bomb in the Kree galaxy during the Kree-Shi'ar War came about due to his manipulations. With the objective to jumpstart Kree evolution which had reached a dead end via the Nega-Bomb radiation. It would take millennia but he could wait. He later came into possession of the Forever Crystal at the conclusion of the Destiny War, and used it to accelerate the evolution of the Kree, speeding up the process by numerous millennia till they became Ruul.[6]

The X-Men, Ms. Marvel, and Goliath got on board Ronan's Citadel (the main ship), hacked the computer, retrieved information, battled Ronan, and escaped the Citadel. By this time Ego had terraformed half the Earth.[7] A strike force of heroes (Avengers, X-Men, New Warriors, etc) and alien criminals led by US Agent teleported to a watchtower. They disabled the energy barrier at the transmat bay and attacked. It's communications & control had been disabled by Cadre K which had permitted themselves to be captured as part of Xavier's plan. Back on Earth, a team of magic users led by the Scarlet Witch failed to halt Ego. On Hala, the group of Avengers held captive by the Kree broke free and transported themselves to the Intergalactic Council via Quasar's Nega-Bands. Where Lilandra granted them an audience and Moondragon psychically showed all what they learned, that the Ruul were actually Kree. How the Supreme Intelligence had shaped the Kree into Ruul, and manipulated events to get the Intergalactic Council to quarantine Earth and turn it into a prison planet. With the objective of turning Earth into Ego, one under his control to be used as a weapon.

An image of the Supreme Intelligence appeared which taunted the Council, informing them that the Kree had taken back Hala from the Shi'ar alongside a score of ex-Kree worlds. Secretly built fleets had been launched to reclaim the Kree Empire. To stop the heroes from containing Ego, Ronan teleported himself (now multi-story in height) and a Kree strike force to Earth only to face the heroes who were teleported from the watchtower to his location. He was boosted by Ego's power and fought the heroes. While they battled, using the machine that Mr. Fantastic and Iron Man built, Quasar ended the threat that Ego posed to Earth. The alien criminals were rounded up, recaptured, and extradited. Meanwhile the Council was busy with the war with the Ruul. Due to Ego's actions, the defenses of the other interstellar powers had been weakened. Because the Ruul were well-equipped, fighting ferociously, and were entrenched the war was not going well.[8] 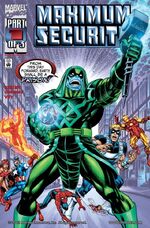 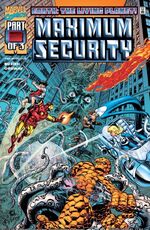 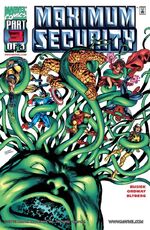 Retrieved from "https://marvel.fandom.com/wiki/Maximum_Security?oldid=5642961"
Community content is available under CC-BY-SA unless otherwise noted.