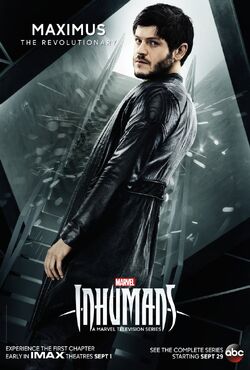 Maximus was the prince of Attilan, a city on the Moon populated by Inhumans. Unlike most of the city's inhabitants, Maximus went through the Terrigen Mists unchanged. This should have placed him in the city's lower castes, but his position within the Royal Family saved him from a life of labor in the mine tunnels.[1]

Maximus grew to believe that the Inhumans' time on the Moon was coming to an end, and that to survive they must reclaim their home on Earth. Black Bolt, Maximus' older brother and Attilan's king, disagreed with Maximus' bold vision for the Inhumans' future. This frustrated Maximus, who already believed Black Bolt was mismanaging the city's limited resources. The final straw came when Maximus learned Black Bolt secretly sent his agent Triton to Earth to find humans who reacted to the Terrigen that contaminated Earth's water supply[2] and bring them back to Attilan. He somehow hired a team of mercenaries to ambush Triton when his mission brought him to Hawaii. Maximus presented evidence of Triton's failed mission to the Royal Family, which caused Gorgon, the head of the Inhuman Royal Guard, to head to Earth to rescue him.[1]

With the rest of the royal guard backing him, Maximus launched a coup to replace his brother as the king of Attilan, beginning with ordering his lieutenant Auran to execute Kitang when he refused to have the Genetic Council support Black Bolt's removal. Although Gorgon and Karnak were able to evade Maximus' soldiers, Attilan's queen Medusa was surround by the royal guard. Maximus forcibly shaved her head to take away her Inhuman hair that the Terrigen allowed Medusa to wield like a weapon. With Medusa seemingly taken care of, Maximus and his soldiers moved to take out Black Bolt, who had isolated himself to think before Maximus' coup began. To Maximus' surprise, Black Bolt was prepared to use his powerful voice on his brother, but the teleporting dog Lockjaw suddenly intervened and disappeared with Black Bolt.[1]

Maximus' soldiers captured Medusa's sister Crystal, the only remaining member of the Royal Family Lockjaw had not evacuated to Earth, and forced Lockjaw into a deep sleep when he returned to the city to rescue her. He sent Auran to Earth to "take care of" the rest of the Royal Family when they found Medusa's location when Crystal attempted to contact her. After forcing what remained of the Genetic Council to back his claim to the throne, Maximus announced his new position as king to the people of Attilan, and promised the lower castes that together they will build a more equal society on Earth.[1]

Like this? Let us know!
Retrieved from "https://marvel.fandom.com/wiki/Maximus_Boltagon_(Earth-199999)?oldid=6074478"
Community content is available under CC-BY-SA unless otherwise noted.