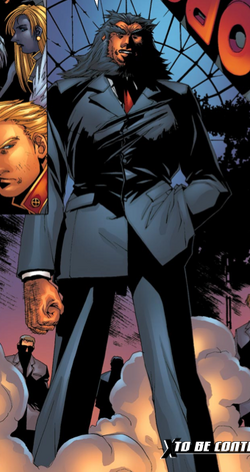 Maximus Lobo was part of a new breed of mutants that bore a striking resemblance to werewolves. He ran the company Lobo Technologies, which was a division of Worthington Industries and owned by the veteran X-Man Archangel.

In White Plains, New York, where Lobo Technologies was located, Maximus Lobo and more of his kind, the self-fashioned Dominant Species, slaughtered a small group of humans, but spared the mutant girl who was present. When a team of X-Men went to investigate this murder, Lobo fought and defeated Wolverine in a relatively short time. Lobo and the others then engaged the rest of the X-Men there and forced them to retreat.

Lobo and his pack caught up to Archangel and Husk, and tried to kill them off. There, he claimed to have killed Archangel's father. Lobo and his werewolves pursued the two mutants back to Lobo Technologies, where it was revealed that Lobo was planning to illegally see Stark Enterpises under Archangel's name. When the rest of the X-Men arrived to help Archangel and Husk, Lobo created an explosion to cover his escape.[1]

Lobo and the Dominant Species later returned when the dimension-hopping Exiles teamed up with the X-Men to battle an alternate reality version of Havok. Lobo sought to sway the young lupine mutant named Nicholas Gleason to his cause.[2]

Maximus lost his mutant powers after the M-Day and was briefly threatened by a vengeful Nicholas Gleason after the events of Messiah Complex.[3]

Like this? Let us know!
Retrieved from "https://marvel.fandom.com/wiki/Maximus_Lobo_(Earth-616)?oldid=6420754"
Community content is available under CC-BY-SA unless otherwise noted.