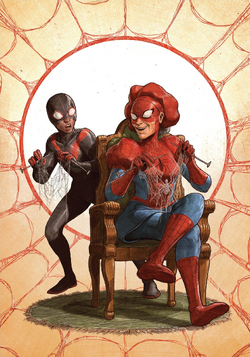 But if it's any consolation, dear: "Spider" is more of a costume to me than my identity. In truth, I'm really just your friendly neighborhood aunt!

Due to her nephew Peter having forgotten his lunch at home, May Parker rushed to a science demonstration to give it to him. There she was bitten by a Radioactive Spider which gave her spider-like powers.

Using a costume to hide her real identity, May set out to earn money for the family doing stunts. However, when the villain Leap-Frog made an appearance, the Spider-Ma'am defeated him and became a crime fighter.[2]

During the first Totem War, Karn came to Earth-3123 to kill the spider-totem of this reality. May surrendered herself willingly, if only to keep her husband and nephew from harm. However, Karn was stopped by the Spider-Army.[3]

After revealing her identity to her family, they were supportive of her superhero career and created Team Spider-Ma'am. They ran reconnaissance and Peter also created and maintained Web-Shooters for her.[1]

Spider-Ma'am was recruited into the Spider-Army to battle the Inheritors on the Prime Marvel Universe. The geneticists of the Superior Spider-Army ended the threat of the Inheritors by transferring their consciousnesses into infant human baby bodies. The children were adopted by May, taking them back to Earth-3123.[4]

One day, Team Spider-Ma'am was attacked by their Earth-20143 counterparts. Spider-Man came to their aid and they were able to gain the upperhand, until Miles's counterpart entered the fray. Using their connection to the Web of Life, May and Miles opened a portal which sucked the villains into another universe.[5]

Like this? Let us know!
Retrieved from "https://marvel.fandom.com/wiki/May_Reilly_(Earth-3123)?oldid=6427791"
Community content is available under CC-BY-SA unless otherwise noted.