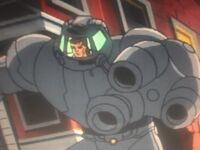 Origin
Created by Alistair Smythe to acquire the Tablet of Time for the Kingpin.

The Mega-Slayer was a robot created by Alistair Smythe to acquire the Tablet of Time for the Kingpin. It was a humanoid robot, making it extremely versatile, and was thus capable of walking, and grabbing objects. The robot could produce missiles, lasers and pulse blasters from it's fingers, morph it's hand into a pistol, and fly by means of a jetpack which was strapped to it's back. To counter Spider-Man's spider stickiness, the slayer was coated with a super-slick compound. Smythe controlled the robot through a remote control panel, and the controller's face could be seen on the robot through a screen in the head area.

When the Mega-Slayer successfully stole the Tablet of Time, it also kidnapped Dr. Curt Connors, who could control the tablet. However, the tablet and Connors were stolen back by Tombstone for Silvermane. The original Mega-Slayer was eventually destroyed by a rocket launcher fired by one of Silvermane's men.

Smythe later created a line of the Mega-Slayers, which took part in the Kingpin's crimes. After Smythe left the Kingpin's employ, one Mega-Slayer that he created was still owned by the crime lord, which he later used to stop the Scorpion and the Green Goblin from crashing Peter Parker's wedding to Mary Jane Watson, but was destroyed.

Retrieved from "https://marvel.fandom.com/wiki/Mega-Slayer_(Earth-92131)?oldid=5465519"
Community content is available under CC-BY-SA unless otherwise noted.