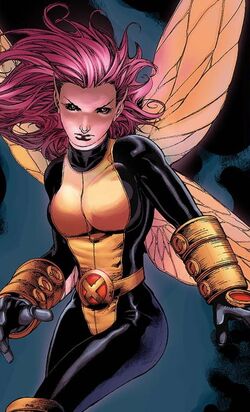 Megan Gwynn, alias Pixie was raised by her grandparents in the small mining town of Abergylid in Wales. Her mutant powers manifested in a near-miss road accident involving her bicycle and another car. She could manifest rainbow-colored butterfly wings allowing her to fly with great maneuverability.[6]

After enrolling at the Xavier Institute, Megan was assigned to the Paragons training squad under the tutelage of former New Mutant, Wolfsbane.[7] When it was discovered that Wolsfsbane had been in a romantic relationship with a student, Elixir, she left the school, and was replaced by her former teammate, Magma.[8]

Gwynn proved herself to be an amiable and cheerful student, and she fit in well with her squad. Following M-Day, nearly all of the Institute's students were depowered, leading to the dissolution of the school's training squads. Gwynn was one of only 27 students, along with her fellow former Paragons, Trance, Wolf Cub, and Match, to have retained their mutant abilities. Forty-two of Gwynn's former classmates were killed when a bus carrying several depowered students was ambushed. Among the confirmed deaths was Gwynn's fellow Paragon DJ.[9]

Pixie, along with Anole, Loa, Wolf Cub, Gentle, Rockslide, and Match, were told a frightening "ghost story" one night at the school by their fellow student, Blindfold. Pixie, frightened by the story, told Blindfold that she didn't like her anymore. Blindfold apologized to her and told her, "I'm sorry for your loss". It soon turned out that this tale wasn't a story at all, but rather a vision of things past and of things to come. The group was soon sucked down into the realm of Limbo, where they were immediately attacked by a mob of demons. Pixie stayed by Blindfold's side during the fight, and Blindfold cautioned Pixie and the others that Gwynn must not "fall into darkness". She used her powers for the first time, incapacitating several demons with her "pixie dust", causing them to suffer psychedelic hallucinations. After Illyana Rasputin, now known as Darkchylde, saved the small group, she asked N'Astirh to bring Megan to her. Despite her friends' trying to stop her, Megan gave into Darkchylde's request for a portion of her soul to create a Soulsword. Illyana then explained that the knife was actually a portion of Pixie's own soul, which is why her Souldagger was smaller than the original Soulsword. Black magic could now fill the hole left behind in the knife's creation, leaving Pixie no longer an innocent personality as well as changing a great portion of her hair black instead of the previous pink.[10]

Pixie was taught a teleportation spell by Illyana. She teleported her and her friends to Belasco to stop him from torturing the rest of the team. She was then told that in order to save her friends she must use her knife to stab Belasco. Initially hesitant, Pixie followed through with her orders and lost more of her innocence by killing the villain. After defeating Belasco and escaping from Limbo, Pixie was officially made a member of the New X-Men.[1]

Pixie was sitting in the medical lab along with Dust and Nezhno where she revealed that when she was of age, Dr. Strange would tutor her in magic. She also questioned Sooraya about her religion and gushed over how Nehzno protected her in Limbo. Later she participated in a training session with Wolverine where she made him see unicorns. She was also questioned by Mercury about her age and Hellion assumed she was the youngest because she was the most immature.[11]

Pixie, along with the other New X-Men, took part in a battle against the Acolytes when they attacked the mansion seeking the Destiny Diaries. Blindfold later stated that Pixie would soon be injured.[12]

When the first new mutant since M-Day appeared, Pixie joined X-23, Hellion, Anole, Surge, Armor, and Rockslide in attacking the Washington, D.C. base of the Purifiers by teleporting them there. They were opposed by Lady Deathstrike and the Reavers. When Julian was injured and the Reavers were about to attack, Pixie panicked and couldn't teleport the team out until Rictor, who had infiltrated the Purifiers as a spy, told her to concentrate or else they would all die. Pixie did so, but blindly teleported the team, scattering them between Washington, D.C. and the Xavier Institute. Injured, she mentally called out to Emma Frost, breaking Emma's concentration on the fight between a group of X-Men and the Marauders.[13]

Later, back at the mansion, she was with several other students and Beast when Predator X attacked several students outside, then changed tactics to go after the weaker wounded students in the infirmary. Pixie, realizing that X-23 had killed this type of creature before, attempted to teleport Predator X to X-23's location, but mistakenly took the majority of the students and Beast along with her and the creature, dropping them in the middle of the X-Men's fight with the Marauders on Muir Island.[14]

During the fight, Pixie was brutally beaten by the Malice-possessed Omega Sentinel, who taunted Pixie until Megan unexpectedly stabbed her foe with her Souldagger, exorcising Malice from Omega Sentinel's body. She was later consoled by Mercury after Professor X was shot and mortally wounded.[15]

After the disbanding of the X-Men, Pixie went home to Abergylid to find the townspeople possessed by Demons. With help from the X-Men, Pixie defeated the demons and liberated her home. Afterward, Pixie accepted the X-Men's invitation to relocate to San Francisco.[6]

After the X-Men settled in San Francisco, Pixie was beaten up by racist Hellfire thugs, secretly being controlled by Empath and Madelyne Pryor. Determined not to let them get the best of her, she healed up and stabbed Empath, who had been giving the X-Men quite a hard time, in the head with her Souldagger. [16]

During the Skrull Invasion, Pixie joined the team in the fight to defend the city. She was even assigned her own team to battle the Skrulls.[17]

After a mishap with her Souldagger while training with Nightcrawler, Pixie draws the Soulsword from his chest. Sensing the sword's presence from Limbo, Illyana teleported to the X-Men's base to retrieve her sword. Pixie fought Darkchylde, demanding the missing piece of her soul back, but Illyana triumphs and teleports back to Limbo with her Soulsword.[18]

The X-Men assemble a team and teleport to Limbo using Pixie's magic, but are beset by demons. At Belasco's castle, Magik is defeated and captured by Belasco's daughter, Witchfire, who is planning to take over Limbo by using the bloodstones, made long ago from Magik's soul, to summon the Elder Gods. Witchfire combines her three bloodstones with the one Magik made from Pixie's soul, which summons Pixie to her side. Witchfire declares Pixie to be her apprentice and starts the process to make the fifth and final bloodstone from Pixie's soul. Pixie takes on a demonic appearance, but the ritual is interrupted by Nightcrawler and the X-Men who have teleported in. Nightcrawler uses Pixie's soul dagger to stab Magik and thus draw out her Soulsword, but Witchfire completes her spell and creates the final bloodstone.[19] Nightcrawler cuts off Witchfire's hand as she draws the bloodstone from Pixie, but Witchfire is still able to summon the Elder Gods. Magik, wearing the immune-to-magic Mercury as armor, is able to defeat Witchfire and retrieve the Bloodstone Amulet. Magik and Pixie combine their soul weapons to remove the latest bloodstone from the Witchfire's amulet, reversing her spell and banishing the Elder Gods. Witchfire escapes with the bloodstone amulet with four of five bloodstones (the original three created from Magik's soul and the one Magik created from Pixie). Pixie turns her soul dagger on Magik, only to discover her dagger has been enhanced by the fifth bloodstone. She flies away in anger.[20]

Pixie found herself and several of her teenage teammates under a spell, causing them to live under the impression that they were ordinary high school girls. However, the illusion begins to fade, with Pixie finding herself in confrontation with the demon Saturnine. Meanwhile, a woman arrived on Utopia claiming to be her mother, demanding to see her.[21] Later, her mother showed up in the Wyngarde mansion, where Lady Mastermind was fighting with Martinique. She told them to stop acting like the babies of the family and that they have been usurped. Pixie was revealed to be Jason Wyngarde's daughter and the Mastermind sisters sibling.[22]

During the Second Coming event, the demons N'Astirh and S'ym cut a deal with Bastion's forces and provided them with a "weaponized ritual" that sent Magik back to Limbo. When the X-Men teleport in a team to rescue her, S'ym and N'Astirh approach Pixie to make another deal: if Pixie will kill Magik, and take her soulsword to N'Astirh, he will return the missing piece of Pixie's soul and free her from Limbo's darkness forever. After Pixie turns on him and frees Magik, they assist Anole and Cannonball against some corrupted X-Men. After the battle ends the two girls came to understand each other better.[17]

Megan was captured by the Project Purgatory who stole her Souldagger[23] and ripped out another piece of her soul.[24] After Legion destroyed the Elder Gods, Illyana returned to Pixie her two Bloodstones and Souldagger.[25]

After battling Sentinels across the globe, Pixie was injured. While in the infirmary, she flirted with and kissed Velocidad; a very jealous and angry Hope Summers soon interrupted the pair. Later, as Pixie packed for the return to Westchester, Hope approached her with a request to join the team to offer them faster transport.[26] Pixie accepted and began training with the Lights.[27] Pixie took part on a mission when a "new light" appeared only to find out it was Sebastian Shaw. She was frozen by Jin Billion's men but her teammates saved her. Pixie also took part in stopping Zero from killing Hope.[28]

Exodus attacked the Jean Grey School to impel Wolverine's X-Men return to Utopia. He changed his mind however after reading the minds of Rogue and Wolverine, deciding that the best way to reunite the mutant race was to kill Cyclops. Pixie and the other students came to help when Rogue's message was sent to Utopia, much to the displeasure of Wolverine. After the battle was over, Rogue offered Pixie and the other young mutants a place in the school, but she and the others refused the offer.[29]

When Unit escaped from S.W.O.R.D and tricked Cyclops' X-Men into believing a new mutant emerged. Hope and her team were sent and found only Unit waiting for them. Unit controlled the Lights to stand down, teleport away, and fall asleep, leaving him to speak with Hope.[30]

Avengers vs. X-Men and Beyond

Megan was one of the young X-Men who were captured by the Avengers and sent to the Avengers Academy.[31] Afterwards, she made her way to the Jean Grey School where she eventually graduated and became a full member of the X-Men.[32]

Pixie was seen alive during the Celestial and Thanos' attacks in New York.[33]

She became a citizen of the mutant nation, known as Krakoa. Then, she was seen having a drink with Gentle at the celebration of all the things they had accomplished.[34] In the wake of X's death, she was seen mourning the great loss.[35]

Pixie is a hybrid mutant and fairy and possess powers granted to her both by her mutation and inherent magical abilities, without a clear distinction regarding the source of each power. Her powers include:

Flight via wings and magical teleportation.

Like this? Let us know!
Retrieved from "https://marvel.fandom.com/wiki/Megan_Gwynn_(Earth-616)?oldid=5191491"
Community content is available under CC-BY-SA unless otherwise noted.