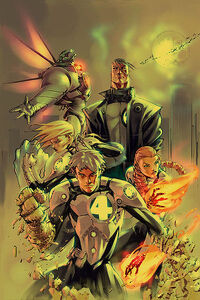 Base of Operations
Baxter Building
Affiliations

A year prior to the main events of the mangaverse, Reed Richards, Sioux and Jonatha Storm and Benjamin Grimm were members of an experiment into Descriptor Theory held in Alpha Base located in the Korolev crater on the moon's darkside.

The experiment was a failure for the most part, the entire staff and the majority of the test subjects either vaporized or displaced to a different reality while a good billion tons of the moon's mass was displaced, becoming a ring of debris orbiting the satellite. The only survivors being what would become the Megascale Metatalent Response Team Fantastic Four.

How they survived the incident is unclear, but once they returned to earth, within the year they had set up the Baxter Building as their base of operations to take on extraterrestrial and extra-dimensional threats that appeared.

Equipment:
Metatalent Augmentation Suit: The standard suit for the team, they originally used power directed via microwave relays from the Baxter building's four Tokamak reactors. They were later modified to contain an internal power source to allow them to generate Megascale Metatalents outside the range of the relays.
Transportation:
Fantasticar: A shuttle capable of leaving earth's atmosphere. It could easily survive harsh environments like close proximity to an active volcano and weather falling debris from Galactus.

Retrieved from "https://marvel.fandom.com/wiki/Megascale_Metatalent_Response_Team_Fantastic_Four_(Earth-2301)?oldid=3938284"
Community content is available under CC-BY-SA unless otherwise noted.