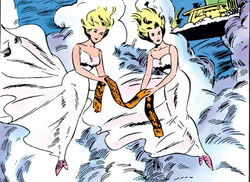 Part of Norse myth, Megingjord was the enchanted Belt of Strength owned by Thor. While worn by Thor, his already legendary strength doubles.[2]

It was first used by Thor in the modern era while trapped by the magician Sandu,[2] who was being manipulated by Thor's evil step-brother Loki. The Belt was normally held in reserve by Odin in Asgard while Thor was not using it.

The belt was worn by Thor when Kurse was being empowered by the Beyonder.[3]

The belt was worn by Red Norvell when he used it to lift Thor's hammer Mjolnir, and temporarily replaced Thor. Odin allowed this as part of a plan to cheat Ragnarok.[4][5]

Later, Thor wore Megingjord to boost his powers and used his God-Blast unleashed from Mjolnir in an attempt to breach the seemingly impenetrable armor of the Celestial Exitar.[6]

During a battle with a higher powered clone of Thanos, Thor received Megingjord along with a shield and gauntlet empowered with Odinforce from Odin and used them to finally defeat the Thanos clone.[7]

Mejingjord has not been seen since, and its whereabouts are unknown.

Like this? Let us know!
Retrieved from "https://marvel.fandom.com/wiki/Megingjord?oldid=6431849"
Community content is available under CC-BY-SA unless otherwise noted.