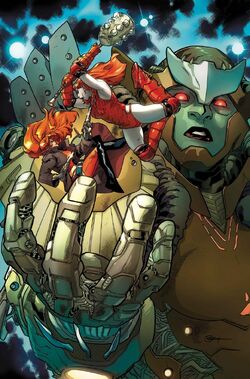 You guys! You guys! Do you feel it? We're real! We're real and we're winning/triumphing/conquering!

Mekara was one of the six seemingly original creations of the young monster fanatic Inhuman Kei Kawade, who possessed the ability to summon whichever monsters he drew on his notebook; however, the drawings of these six monsters sat unfinished. When Kei used his powers to help fend off the invading Leviathon Tide, Moon Girl flipped through his notebook and suggested to finish the drawings of Mekara and the others. Kei shot her down, believing that his powers would only work on existing creatures.[1]

When the Leviathon Mother made earthfall to finish her children's job and kill Kei, she defeated all of the monsters that Kei had summoned. The young Inhuman decided to try his hand at summoning the so-called original monsters as a last-ditch attempt to stop her. The plan worked, and Kei was able to summon Mekara alongside the other five: Slizzik, Aegis, Fireclaw, Scragg, and Hi-Vo.

The group of monsters were on the verge of winning until the Leviathon Mother impaled and killed Fireclaw. This turn of events prompted Kei to try out another untested gambit. He used his powers to merge the remaining monsters and himself into Smasher, who managed to kill the Leviathon Mother, causing most of the remaining Leviathons to flee the Earth. Following their victory, Kei separated the five monsters. When the dust settled, Kei and his family moved to Mu, an island created for him which could serve as a refuge for his monsters, including Mekara.[2]

Like this? Let us know!
Retrieved from "https://marvel.fandom.com/wiki/Mekara_(Earth-616)?oldid=5465524"
Community content is available under CC-BY-SA unless otherwise noted.