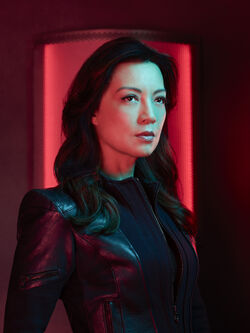 People believe what they want to believe to justify their actions.

Melinda May used to be a field agent for S.H.I.E.L.D., and was highly skilled at her job. She became a colleague of Agent Phil Coulson. She also married Dr. Andrew Garner, a S.H.I.E.L.D. psychologist.

During her time as a field agent, in 2008, she joined a S.H.I.E.L.D. team on a mission to Bahrain for an Index Asset Evaluation and Intake of Eva Belyakov, a woman with super-strength. The mission went south when Eva and a group of gunmen took a girl hostage. The S.H.I.E.L.D. team attempted to contain the situation only for them to all get abducted. With S.H.I.E.L.D. stalled by red tape and with the Bahraini military closing in, May went in alone and discovered that the agents were being mind-controlled. She managed to kill Eva, only to learn that it was her daughter, Katya, who was the one with the mind-control powers. Shot in the leg and unable to run, May chose to shoot Katya in self defence to avoid being touched, killing her and breaking her control over her thralls. The agents had no memory of their time under Katya's control and presumed that May fought through an army to save them and nicknamed her "the Cavalry". However, traumatized by what she had done, she requested reassignment to a quiet desk job in recent years.[8]

When Agent Coulson was given permission to start a team for special assignments May was one of the first he recruited under the promise that she would only be "driving the Bus". This proved false as she was forced to use her field experience once again in their first few missions.[9]

Agent May was revealed to have been communicating directly with Director Fury, providing status updates on the team. Agent May has been involved behind the scenes with the creation of Coulson's team from the beginning, including drawing up the team itself (and passing it off to Fury), as well as knowledge of Project T.A.H.I.T.I.

May continued in her role as a field agent after Coulson assumed the role of Director of S.H.I.E.L.D. She participated in a mission to retrieve information on an item known as the Obelisk from a former S.H.I.E.L.D. agent, but the mission was aborted when a superpowered assassin killed Browning and took off with his information. Back at the Playground, May was able to match the assailant's DNA to Carl Creel, who they deduced had been working for Hydra.

After Keonig discovered that Creel was going to attack the newly-promoted Brigadier General Talbot, May and Skye were sent to Washington to protect him. During the fight, May was able to get Creel away from Talbot, and tried to fight him with little success. After the army took Creel into their custody, May abducted Talbot and brought him back to the Playground.

Later, May and a squad of fellow agents were tasked with infiltrating the army base where the Obelisk was stored to prevent it from falling into Hydra's hands. The mission objective to retrieve the Obelisk was thrown into disarray thanks to Carl Creel's interference, causing Skye to ask Coulson if they should abort the mission. Coulson ordered them to continue according to plan, but the mercenaries among the squad left anyway. Skye and Triplett were able to get away in a stolen quinjet, while May made her escape on a motorcycle.[10]

While escaping the base, May came across the mercenaries' flipped car, and found only Lance Hunter had survived. She offered to help him get out of the car, but Hunter refused and told her to go after Creel, who had taken the Obelisk. May left Hunter a tool to cut himself out of the car and raced after Creel.

May soon caught up to Creel, and his stolen pick-up truck, but was ordered not to engage. She tailed the vehicle to a roadside diner where she waited outside until she heard a commotion and hurried in to investigate. A waitress had been petrified into a statue-like state after having come into accidental contact with Creel and the Obelisk. Creel himself had slipped away amid the commotion.

May, Skye, Triplett, and Hunter later took part in Coulson's attempt to stop Creel from handing the Obelisk off to his superiors at Hydra, but Hunter betrayed the rest of the team and disabled them with his I.C.E.R. so he could get his revenge on Creel alone. After the mission was over and Creel was in their custody, Skye confided in May that she thought something was wrong with their new director. May brushed off Skye's concerns before heading to Coulson's office. There she made the observation that he was overdue of another "episode." Not long after, May recorded Coulson meticulously recreating the alien symbols again.[11]

When a 500-year-old painting was found to have symbols on its back, like those Coulson had been drawing, Coulson and May infiltrated a fund-raiser held by a Miami financier to take the painting for themselves. However, the painting had already been bought by the federal government, and Talbot was there to retrieve it. Leaving the party empty-handed, Coulson and May were confronted by Talbot on their way out. He offered to let Coulson have access to the painting if he would study at a government facility under his supervision. Coulson agreed, but needed an hour to give orders to his teammates.

May went to the hotel room they were to meet him at instead. In reality, Talbot was actually the Hydra agent Sunil Bakshi in disguise, and May was attacked and replaced by an impostor. Bakshi tied her up and started to torture her, trying to get any information about the new S.H.I.E.L.D. out of her. However, Coulson soon came back with the impostor, and realizing she was an impostor, attacked her. While Bakshi was distracted by the commotion outside, May escaped from her confinement and tackled Bakshi through the door, barging in on the fight. May then took over fighting her impostor from Coulson. Although they were equally matched, May eventually defeated her impostor with one of Bakshi's torture tools.

Both Coulson and May escaped with the painting and took it back to the Playground, where an analysis revealed the symbols were relatively recent. Deducing that there was another person somewhere making these carvings, Coulson reminded May that she would need to put him down if he ever went mad like Garrett. May refused, and showed him the plans she made to move him to the Australian Outback in a worst case scenario, but Coulson ordered her to kill him when the time came.[3]

Empathy: After her time in Izel's realm, May gained the powers of empathy, feeling the emotions of those around her, the closer the proximity the stronger the emotions.[12]

May's empathic abilities have left her unable to feel any emotions of her own.[12] She could also be overwhelemed by emotions of others such as fear or panic.[13]

Like this? Let us know!
Retrieved from "https://marvel.fandom.com/wiki/Melinda_May_(Earth-199999)?oldid=6283194"
Community content is available under CC-BY-SA unless otherwise noted.